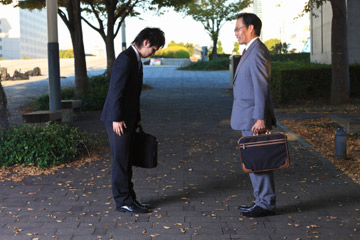 Is this what comes to mind when you think of the Japanese?
iStockphoto/Thinkstock

When you hear the phrase "Japanese traditions," you may immediately think of sushi. Or your brain might conjure an image of a bowing Japanese businessman, a kimono-clad geisha, a sumo wrestler or a sword-wielding samurai. How about origami, haiku or bonzai? You may know all of these things as traditionally Japanese, but that's just scraping the surface of Japanese culture

Japan's interactions with other countries have had an immeasurable effect on its traditions, with China being the biggest influence. The two countries are separated by a small body of water -- the East China Sea -- with just 512 miles (824 kilometers) between Shanghai, China and Nagasaki, Japan. To say that Sino-Japanese relations throughout history have been complicated is an understatement, but numerous Japanese traditions have their roots in Chinese ones. Religion is probably the single largest influence that China has had on Japan.

While today the majority of Japanese do not claim a religious affiliation, lingering effects from ancient religious and spiritual traditions have a permanent place in secular life. Buddhism spread to Japan from India in the second century B.C. by way of the Silk Road, intertwining with the indigenous Shinto to create a complex system of spirituality, ritual and ancestor worship. The two religions, separated by an official act in the mid-1860s (although not entirely in practice), have had lasting effects on everything from Japanese architecture to its system of writing.

Despite the long history of interactions with its neighbors, Japan's island status and ability to isolate itself was also a major factor in the development of its culture. Fearing colonial imperialism and religious influences from Western missionaries, the Tokugawa shogunate, a feudal regime that ruled Japan from 1603 to 1868, imposed a closed foreign policy on the country for more than 250 years. This prevented the Japanese from leaving and foreigners from entering the country, with controlled exceptions for trade purposes. The isolation strengthened Japanese nationalism and allowed more indigenous philosophies to flourish. The country was "opened" to the West in 1853 after U.S. Naval Commander Matthew Perry appeared with heavily gunned ships and essentially forced the shogunate to sign a treaty. This led to the Meiji period of modernization and industrialization, but nationalism and emperor worship grew stronger as Japan attempted to retain its own culture despite the growing influence of the West.

Less than one hundred years later, Japan was a member of the League of Nations and considered a major world player. Aiming to dominate Asia and already at war with China, Japan officially entered World War II by attacking American and British holdings in the Pacific, including Pearl Harbor, in 1941. In the years following Japan's defeat, the country has become a key ally for the United States and the two nations have come to share a lot of cultural traditions.

Even when incorporating foreign elements, Japanese traditions remain uniquely Japanese at the core and are often puzzling to outsiders. Next, we'll look at some of the most confounding customs -- social etiquette.