Training for Life and War 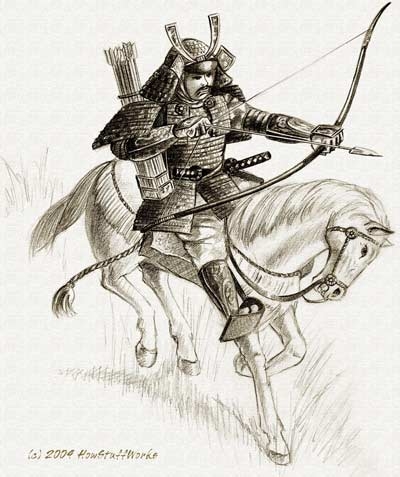 For the first few centuries of their existence, samurai were better known as horse-riding archers.

The amount and form of a samurai's training depended on the wealth of his family. In lower-class families, sons were sometimes sent to village schools for basic education, but they received most of their samurai training from their fathers, older brother, or uncles. Training in martial arts was considered very important, and often began at age five. Sons of wealthy families were sent to special academies, where they were tutored in literature, the arts, and military skills.

The image of the samurai that is probably most familiar is that of a sword master wielding his curved katana with deadly skill. However, for the first few centuries of their existence, samurai were better known as horse-riding archers. Firing a bow while riding a horse was a difficult task, and mastering it required years of constant practice. Some archers practiced on targets tethered to a pole, which could be swung to make a moving target. For a time, living dogs were used as moving archery targets, until the shogun abolished the cruel practice.

Swordsmanship was taught in a similarly relentless manner. One story tells of a master who would strike his students with a wooden sword at random times throughout the day and night, until the students learned to never relax their guard.

In addition to warrior skills, samurai were expected to be well-educated in other areas, such as literature and history. During the Tokugawa period, a peaceful era, the samurai were not needed much as warriors, so these academic skills were especially useful. However, some samurai masters warned their students not to dwell on words and paintings too much, fearing their minds would become weak.