Confrontation
The detective presents the facts of the case and informs the suspect of the evidence against him. This evidence might be real, or it might be made up. The detective typically states in a confident manner that the suspect is involved in the crime. The suspect's stress level starts increasing, and the interrogator may move around the room and invade the suspect's personal space to increase the discomfort.

If the suspect starts fidgeting, licking his lips and or grooming himself (running his hand through his hair, for instance), the detective takes these as indicators of deception and knows he's on the right track.

Theme development
The interrogator creates a story about why the suspect committed the crime. Theme development is about looking through the eyes of the suspect to figure out why he did it, why he'd like to think he did it and what type of excuse might make him admit he did it. Does the suspect use any particular mode of reasoning more often than others? For example, does he seem willing to blame the victim? The detective lays out a theme, a story, that the suspect can latch on to in order to either excuse or justify his part in the crime, and the detective then observes the suspect to see if he likes the theme. Is he paying closer attention than before? Nodding his head? If so, the detective will continue to develop that theme; if not, he'll pick a new theme and start over. Theme development is in the background throughout the interrogation. When developing themes, the interrogator speaks in a soft, soothing voice to appear non-threatening and to lull the suspect into a false sense of security.

Stopping denials
Letting the suspect deny his guilt will increase his confidence, so the detective tries to interrupt all denials, sometimes telling the suspect it'll be his turn to talk in a moment, but right now, he needs to listen. From the start of the interrogation, the detective watches for denials and stops the suspect before he can voice them. In addition to keeping the suspect's confidence low, stopping denials also helps quiet the suspect so he doesn't have a chance to ask for a lawyer. If there are no denials during theme development, the detective takes this as a positive indicator of guilt. If initial attempts at denial slow down or stop during theme development, the interrogator knows he has found a good theme and that the suspect is getting closer to confessing.

Overcoming objections
Once the interrogator has fully developed a theme that the suspect can relate to, the suspect may offer logic-based objections as opposed to simple denials, like "I could never rape somebody -- my sister was raped and I saw how much pain it caused. I would never do that to someone." The detective handles these differently than he does denials, because these objections can give him information to turn around and use against the suspect. The interrogator might say something like, "See, that's good, you're telling me you would never plan this, that it was out of your control. You care about women like your sister -- it was just a one-time mistake, not a recurring thing." If the detective does his job right, an objection ends up looking more like an admission of guilt. 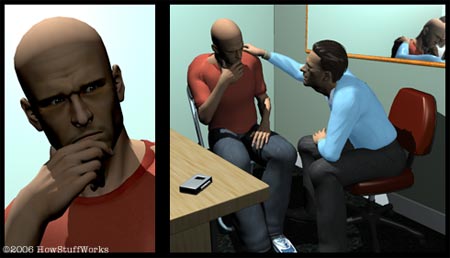 The suspect loses resolve
If the suspect's body language indicates surrender -- his head in his hands, his elbows on his knees, his shoulders hunched -- the interrogator seizes the opportunity to start leading the suspect into confession. He'll start transitioning from theme development to motive alternatives (see the next step) that force the suspect to choose a reason why he committed the crime. At this stage, the interrogator makes every effort to establish eye contact with the suspect to increase the suspect's stress level and desire to escape. If, at this point, the suspect cries, the detective takes this as a positive indicator of guilt.

Alternatives
The interrogator offers two contrasting motives for some aspect of the crime, sometimes beginning with a minor aspect so it's less threatening to the suspect. One alternative is socially acceptable ("It was a crime of passion"), and the other is morally repugnant ("You killed her for the money"). The detective builds up the contrast between the two alternatives until the suspect gives an indicator of choosing one, like a nod of the head or increased signs of surrender. Then, the detective speeds things up. 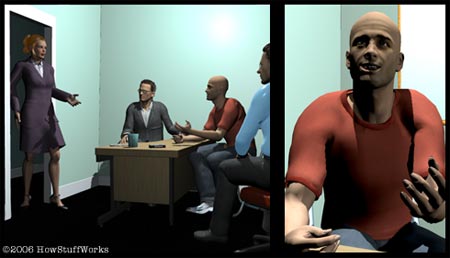 The steps we've laid out here represent some of the psychological techniques that detectives use to get confessions from suspects. But a real interrogation doesn't always follow the textbook. Next, let's take a look at an actual police interrogation that ended with an admissible confession.