Lily Dale: Where the Living and Dead Reconnect

Browse the article Lily Dale: Where the Living and Dead Reconnect 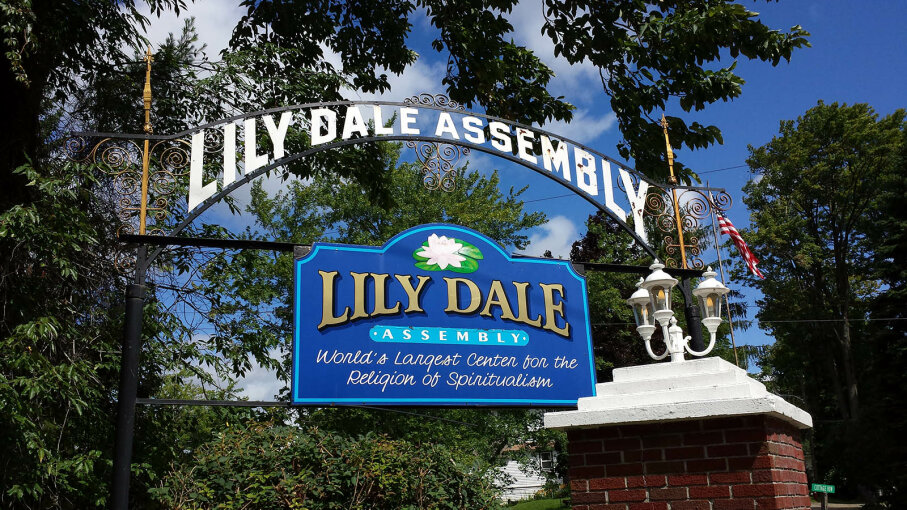 Lily Dale in upstate New York has been welcoming visitors (both alive and dead) since the late 1800s. WikimediaCommons

In 1848, two young women known as the Fox sisters heard mysterious rappings in their house in Rochester, New York, and claimed they were messages from the spirit world. Enough people at the time believed the sisters that an entire new field known as "spiritualism" was born. More than a folk belief in ghosts, spiritualism was (and is) a structured belief that humans consist of a body, a soul and a spirit. When someone dies, the soul and spirit live on in a spirit realm.

Upstate New York at that time was already a hotbed of intellectual communities — so hot it was known as the "Burned-over District" for the nearly constant religious revivals that took place there. Joseph Smith, founder of Mormonism, got his start there. The literary and intellectual community of Chautauqua, where feminist foremother Susan B. Anthony hung out, was nearby. So spiritualism fit right in. "The chief duty of these spirits," according to a study published in the Journal of Religion in 1930, "is to look after the welfare and progress of those on earth."

In 1880, Lily Dale Spiritualist Assembly was founded at the 18-acre Cassadaga Lakes Free Association camp for spiritualist gatherings. In 1906, the whole community was renamed Lily Dale. Now, more than a century later, it sounds kind of weird and witchy and campy, but Lily Dale was incredibly popular in its early days. It began holding summer camps in the 1890s that were well attended, to put it mildly. Susan B. Anthony was one of the many who visited to check out the mediums. A New York Times reporter also stayed in 1898 and claimed that a quarter million people went to the tiny town annually.

"Mediums, as a class, are strange beings," the Times reporter noted. At the time of his visit, mediums were charging $100 per session, which is about $3,000 today. (Interestingly, the price for a reading is still between $80 and $100 in 2018 dollars.) He witnessed a few of the techniques that came to be associated with Lily Dale, such as an ear trumpet that would rise from the floor and deliver a message directly into an attendee's ear. Mediums at Lily Dale also used a slate on which spirits could write messages.

Mediums for Your Mental Health

Spiritualism declined in the 20th century, but Lily Dale remained a stronghold, with summer camps continuing every year. For the past several decades, attendance has also held steady at 20,000 to 30,000 visitors going there in search of clarity and direction. A study published in the Review of Religious Research in 1980 found that only a small percentage of visitors at that time were going to talk to a dead family member.

The study's authors came to the conclusion that the kind of spiritualism practiced at Lily Dale was more like a religious sect than a cult. Instead, the study concluded, the mediums at Lily Dale might be doing people a service by granting them a level of peace and acceptance: "If spirit communication can be associated with madness, it is also possible to view the medium as a mental health resource."

Whether people still visit Lily Dale today for clarity and direction or they want to make contact with the "other side" remains to be seen. But, since the 1970s, the number of mediums and the population of Lily Dale has soared. Back then, the village was home to about 25 to 30 mediums in residence during the summer camps, and a dozen or so who stayed on to keep up the town year-round. Today visitors are welcome in the off-season and Lily Dale has a year-round population of 250, as well as a post office, volunteer fire department, library and a playground. There's also a coffee shop, two restaurants, a few gift shops, some guest houses and even a museum. The National Spiritualist Association of Churches is located there. But only members of the Lily Dale Assembly can lease houses in the community.

But back to the mediums — now there are 54 registered mediums and all aspirants have to pass a test consisting of three readings before being established in the community. And they are still the main draw. Whether people are going in hopes of receiving or conveying a message to dead loved ones is totally personal, and depends on their belief in the mediums' abilities. But those interested don't have to pony up for a private session. There's a day-use fee for anyone who wants to go and simply roam the streets and attend the public meditations and services. And you can visit Inspiration Stump, where services have been held since 1898.

On thing hasn't changed throughout Lily Dale's history: The community has always emphasized sobriety, humility and a decided lack of showmanship. They may appreciate a good psychic pun, but they take their work seriously. They also emphasize that the future is not written in stone — everyone has free will.

Women and men are seen around the Pagoda at Lily Dale around the turn of the century.
The Curt Teich Postcard Archives Collection
NOW THAT'S HOT
You may be surprised to learn that candles and incense are forbidden at Lily Dale. Those are the very basics of being a medium, right? What will they ban next, crystal balls? Well, the buildings in the community are very old and very wooden, and it doesn't take a medium to know what will happen if there's an open flame. Actually, they know very well what will happen: The Fox sisters' house was moved from Rochester to Lily Dale, but it went up in flames in 1955.