Who, Why and How 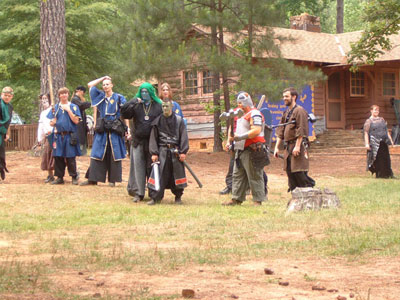 Most games take place at outdoor locations with lodges or other areas for players to congregate, prepare food and eat.
Image courtesy Jennie Breeden/Geebas on Parade

A variety of people, both male and female, like to LARP. "Most of them are very imaginative people," says Zolkosky. "Most of them have a taste for genre fiction, most are highly intelligent…and are in some sense usually a little bit different socially." Social differences often bring players together, and the LARP beings to provide a social group. "I've seen it bring a lot of people out of their shell," Zolkosky says. "I've seen introverts who have lived in their heads for much of their lives, when they find…a LARP, they discover that there are other people who have been living the same stories in their head. And they begin to come out of their shell and form a social circle based on the LARP."

Just as there are different styles of games, there are also different types of players. People like different game aspects or types depending on their interests and temperaments. Zolkosky explains:

There's a wide range of reasons why people play. Some people like to play it like a sport, or like a game, to win. Most people…who are drawn to LARP are very imaginative people, who already create stories and things in their minds, or write stories…I think they're drawn to it because it's a chance to work with other people on creating something like that. I think it fulfills fantasies for some people. The fantasy of living in a world with simple, black-and-white lines, or of just being a heroic figure… I hate to say the fantasy of being someone else; that sounds very trite. But I think for a lot of people it is a kind of fantasy or escapism. Live in a different world for a while, being someone else. A lot of people are drawn to it because they very much like the kind of literature that most LARPs are based on. They like fantasy, science fiction. They want to act it out.
LARPs can include a range of monsters, beasts and fantastic characters.
Image courtesy Jennie Breeden/Geebas on Parade

But even though players can have some basic traits in common, they can have different reasons for how they play and why they enjoy the game. Petter Bockman's essay "The Three Way Model," from "As Larp Grows Up: Theory and Methods in Larp," describes these types of people as the dramatist, the gamist, and the immersionist.

Most players are a blend of these three types. "Different players like different things," says Zolkosky. "There are people who want to just fight all weekend and win a lot of fights. That's cool, too. A lot of this has to do with your style of what it is you're looking for in a game."

Some LARPs allow children to participate. Those that do often require signed permission slips and waivers from parents.
Image courtesy Jennie Breeden/Geebas on Parade

These types also apply to people who create and run LARPs. Dramatists like writing the stories. Gamists like taking care of the details and setting up puzzles for the players to discover. Immersionists like creating a completely real, absorbing world. In addition to creating a world and running sessions, staff must find venues for the games, take care of licenses and insurance where applicable and publicize the game, among other administrative tasks.

For these reasons, creating and running a game is a group effort, rather than the effort of a single person. Zolkosky explains:

No one can really get out and run a LARP alone. You need a team of good, solid, talented people that you can count on. Reliability is crucial there…probably as crucial as talent. But you need a team of people who share your vision…After that, it takes a lot of trust in the people around you…It takes a certain amount of logistical effort. You have to be able to get good sites to run your game, deal with the people you're renting those sites from. Organize your budget so that you can have decent props and costumes. And take good care of the money.

Then, once the game gets off the ground, the staff has to be prepared for the unexpected. "The number of things that can go wrong is insane," says Zolkosky." That's why part of the skill of doing this is being able to cope with anything that happens."

Check out the links below for more about LARP, specific games and related topics.

The History of LARP

It's difficult to pin down exactly when LARP made its debut. However, most sources cite two dates – 1966, with the creation of the Society for Creative Anachronism, and 1974, with the publication of the first Dungeons & Dragons rulebook. Most agree that the game grew from a love of science fiction and fantasy books and movies.