How does etiquette change as your relationships evolve? 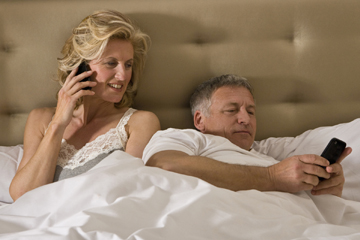 As a relationship grows and changes, some rules of etiquette may fall by the wayside, while others should remain throughout.
Steve Sparrow/Getty Images

People have been fretting over relationship etiquette for centuries. Shakespeare and Jane Austen, for example, both became famous writing about relationships. And while things evolve -- as they have with the introduction of online dating -- many concerns people dealt with centuries ago are still problems today. So let's take a look at the ways etiquette changes, from dating -- online or not -- through divorce. First, the obligatory disclaimer: This is not the exact timeline every relationship will take, but it is one that covers many of the etiquette bases.

The idea that you should be honest and genuine should be self-explanatory, but apparently some people need a gentle reminder. Think about it: This is the age of the Internet. If you post a photo of some supermodel -- male or female -- claiming it's you when, in fact, you look like a real human being like the rest of us, you're going to get found out, either on the first date (if you make it that far) or when you divulge enough other information that your would-be date Googles you and learns the truth.

Lies, over-explanations and raised expectations are not the firm foundation for a good relationship. Post the truth on your profile – sure, not every little thing about you (see next paragraph), but the truth nevertheless. The truth will help you find someone who is interested in the real you, not the glossy, fictionalized persona you wish you were. If you're struggling with what to say or how to say it, ask a friend to read over your profile to see if it's polite, inviting and accurate to who you are.

Telling the truth is good manners and great up to a point, but remember, a little mystery goes a long way too. Unless politics and/or religion are the only things that matter to you in a relationship, keep stuff like that off your profile. As you get to know the other person, these are things you can and should discuss. But initial e-mail exchanges and first dates should be explorations -- and fun. Keep the serious stuff for when your relationship is more serious -- and for when you can explore each other's opinions thoughtfully and with a foundation of respect.

On the flip side, don't ask for a lot of personal information, such as company name, financial status or home address, when first engaging an online dating prospect. Wait for the first date(s). You need to have something to talk about in person, after all, and, if the sparks don't fly, you won't care about these things anyway. And if you ask too early, you could come off like a gold digger, stalker or just plain rude person.

After you've got a first date scheduled, the rules of etiquette change and, frankly, get a little tougher. It can be hard sometimes to be the best possible you on a first date when you're nervous and excited. But that's what you want to be. People -- at least people who want a second date -- generally try put on their best manners for a first date. They wear clean clothes, shower and leave their cell phones off (or at least off the table). They don't curse or drink too much, talk rudely about their exes or bring up money.

It's also important not to air out all the dirty laundry on someone at the very beginning. Follow the TMI (too much information) rule, and err on the side of caution when dragging out the horror stories of your childhood or your last visit to the gynecologist.

While spontaneity is fun in long-term relationships, it can be seen as rude early on. Don't call for a first or second date on a Saturday afternoon hoping to see someone that night. It can indicate that you don't care enough or aren't interested enough to make real plans. And if you're on the receiving end of that call, think long and hard before agreeing to a last-minute first date. You may have a good time, but you may be setting up a pattern of behavior that's hard to break and no fun if you're the one waiting around for Mr. or Ms. Last Minute to call.

As a relationship becomes more serious, it's great to text, call or e-mail during the day -- whatever works for the two of you. But at the beginning, too much attention can make you seem like a stalker. Don't declare your love during the first date and then keep declaring it -- with cards, candy or whatever -- immediately thereafter. It's creepy and just plain rude.

While it is still common for men to pay for early dates, more women are either paying or at least splitting the bill. An easy way to avoid awkwardness is to discuss it ahead of time. If the man initiates the date or insists on paying, suggest paying for your part or leaving the tip. But don't fight about it. That's not proper etiquette either. And be sure you have enough money for whichever route you take. Money is one of those things that many couples never grow comfortable discussing. If you talk about it early on in small, occasion-appropriate doses, it may not cause big problems later.

Finally, don't look at your watch or phone. Even if not intended as such, your date may see these downward glances as a lack of interest on your part. Use early dates to get to know each other without distractions from the virtual world.

As relationships build, you are slowly letting the other person see behind your wall of social etiquette to discover more of the "real" you. This doesn't mean knocking the wall down entirely. Rather, it means that as relationships proceed, couples must decide their own rules of etiquette based on their circumstances, personalities and comfort levels. Keep in mind, however, that the general rules of dating and daily etiquette still matter -- and eventually you'll need to discuss some of the things that you shied away from in the early days. For example, by date six or so, it's not unreasonable to have had a financial discussion. Maybe one of you has more money than the other. You can't continue to go out on dates with champagne and filet mignon if you're operating on a mac-and-cheese budget.

Once your relationship has turned into a true partnership, real life will probably interfere in a number of ways. You may have a demanding job, a sick child or a parent you're caring for. Sometimes you need to be reachable. If that's the case, keep your phone handy and let your partner know why, but don't check it every 30 seconds. Don't worry: Your phone will ring, beep, vibrate or play your favorite song if and when that important call or text comes through. And if it does come through, either excuse yourself to take the call or text back quickly -- and let your partner know what you're doing. Think about it: You'd want the same treatment.

Continue to treat your significant other with respect and kindness -- even if you have let him or her see your literal and figurative dirty laundry. This level of etiquette should be sustained as much as possible throughout a long-term relationship and into marriage -- and even if the unthinkable happens and you break up or get divorced.

Breakups and divorces happen for a variety of reasons, all of which leave bad feelings on one side, if not both sides, of the split. But it's likely you'll have to deal with each other, especially if you have children, even after a breakup. It's in your children's and your own best interests to try to remain civil to your ex.

Think of it as the beginning of a new relationship. You don't want to over-share: Your current significant other or new pet is none of your ex's business -- and all of your respective dirty laundry is no one's business. If you want your secrets kept, keep your ex's. Don't post to Facebook how angry you are or that your ex's new companion is a home-wrecker. Quietly unfriend any offending parties if you know them, and move on. Taking the high road will help you feel better more quickly.

Finally, while some of the rules of etiquette may change as the relationship changes and you grow more comfortable with each other's foibles, the bottom line is to behave within accepted cultural norms while remaining true to yourself. Make your date/significant other/spouse feel important and that he or she is worth seeing you at your best. The golden rule -- do unto others as you would have them do unto you -- applies to all situations, even as your relationship evolves.

Author's Note: How does etiquette change as your relationships evolve?

As someone who is divorced, I've seen firsthand the damage not paying attention to basic rules of etiquette can cause -- and how hard it is to pay attention to them when things aren't going well. My own two cents are to start out with kindness and consideration for the other person and ask for the same in return. Good manners go a long way toward smoothing the rocky places in any relationship.