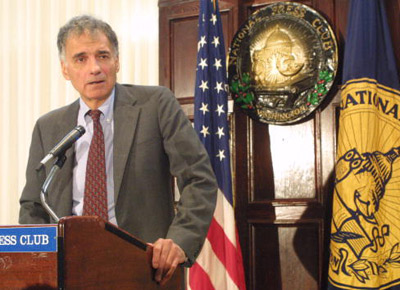 The 2000 presidential election saw the Green Party rise to the forefront of third party politics in the United States. This time around, the Nader/LaDuke campaign raised millions of dollars. By running heavily on an anti-corporate platform, they were able to make the ballot in 44 states and capture 2.7 percent of the vote. Nader ran under the banner of the NACSGP and rejected the additional nomination of the Greens/Green Party USA.

Liberal Democrats who feared Nader would steal away votes from Democratic candidate Al Gore had urged Nader to drop out of the race early in the campaign. The party's response, however, was that Gore differed little from Republican candidate George W. Bush. They emphasized that their goal was to create a permanent third party in the U.S.

But when Gore lost to Bush by a mere (and much contested) 0.5 percent of the vote, many labeled Nader a spoiler. Critics argued that if he had not been there to attract the votes of registered Democrats, his 2.7 percent of the vote would have given Al Gore enough votes to defeat Bush.

Nader defenders, however, argue that the real spoilers in the 2000 election were the U.S. Supreme Court for allegedly allowing "election manipulation" by Florida Republicans, Al Gore for running a "weak campaign" and the Democratic Party itself for not properly suing or pushing for an investigation of the disqualification of 90,000 Florida voters [source: Green Party of the United States].

Despite Nader's 2.7 percent in the 2000 election, the party needed a full 5 percent of the national vote to become eligible for federal matching funds in the 2004 election. Still, Nader's campaign gained the Green Party additional exposure, pushing it ahead of the Reform party as a dominant third party in American politics.

Riding on this success, the NACSGP voted in 2001 to become a unified, national party, changing its name to the Green Party of the United States. This change attracted a large number of members away from the Greens/Green Party USA.

While both Green Parties are still active, the Green Party of the United States claims a larger membership and commands a greater presence among elected officials. Efforts to merge the two groups have been unsuccessful.

Presidential aspirations aside, the party continues to work to cement their role as a vital third party in the U.S. and not follow past notable third parties into obscurity by having their key views absorbed.

For more information on the Green Party and elections, look over the links below.