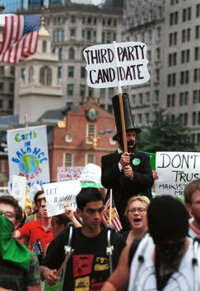 Politics in the United States have long been dominated by a two-party system. But over the course of the nation's history, various groups at state and federal levels have tried to break into the system -- each supporting issues and views unrepresented by the dominant parties. Even barriers like the ballot access laws that make it difficult for third parties to get on a ticket haven't stopped these alternative parties from occasionally rising to the forefront.

In 2000, the Green Party was just such a group, nominating political activist and former independent candidate Ralph Nader for president. Nader ultimately took 2.7 percent of the popular vote in a race where a gap of only 0.5 percent separated Republican candidate George W. Bush from Democratic candidate Al Gore.

Due to this exposure and a growing state-level grassroots campaign, the Green movement continued to gain steam following the 2000 election. Running on such issues as environmental responsibility, nonviolence and global responsibility, the Greens currently boast 230 members in elected office throughout the U.S. and over 300,000 registered party members nationwide. The Greens have even managed to achieve ballot status in 20 states and the District of Columbia.

But where did the Green movement come from? What are its core values and where is it going? In this article, we'll answer each of these questions and get to the bottom of just how green politics work in the U.S.

They say two's company, three's a crowd -- but why is American politics a two-party system? To a large extent, the country was born into the system as Federalists and Antifederalists argued over the U.S. Constitution. Since then, presidential elections usually pit two parties against each other.

The U.S. uses a winner-takes-all or plurality system in elections -- the candidate with the most votes is the sole winner. This system encourages candidates to gravitate toward one party or the other. The Electoral College, campaign finance laws and ballot access laws also contribute to the dominance of the two party system.

No third party candidate has ever taken the White House -- and only one man, George Washington, ever held the position as an independent. 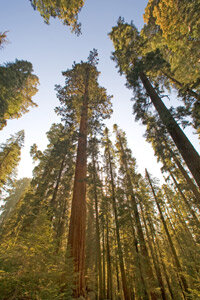 T­­he word "green" is often associated with environmental issues. Sure enough, the issue of ecological responsibility plays a major role in Green Party positions. But just as the modern environmental movement began to emerge in mainstream politics in the 1960s, so too did a number of other socially liberal, peace-orientated concepts.

The Greens divide their core beliefs into what they call "The Greens' Ten Key Values."

In the next section, we'll take a look at the history of the Green Party and how it rose to its prominent third-party status.

History of the Green Party

Currently, there are two Green Parties in the United States. The more prominent and moderate of the two is the Green Party of the United States, which currently holds national committee status under the Federal Elections Commission. The other organization, The Greens/Green Party USA, is more of a political and environmental advocacy group, though a few state and federal candidates have run for office under its banner.

Both organizations, however, can trace their history back to the Green Committees of Correspondence and various state-level Green Parties before that.

The Green Committees of Corresp­ondence

The first Green Parties in the U.S. sprang up at the state level in the early 1980s. They were inspired by the success of Green Parties in Europe and the South Pacific. In 1984, Green activists from across the country gathered in St. Paul, Minnesota to form the Green Committees of Correspondence. They named the group after a body organized by American colonists in 1764 to coordinate communication outside the colonies. The earliest version of the Greens' Ten Key Values emerged from the formation of the Green Committees of Correspondence.

In the years that followed, the state parties met with local success through a few grassroots tactics:

The Green Party in the U.S. advocated not only reform but radical change in areas like national defense and environmental policy. They remained a loose federation of state groups funded by member dues and contributions from non-corporate supporters. But would the party be an activist organization or a political party? To clarify this, the Greens adopted the name the Greens/Green Party USA, with "the Greens" representing their status as a political movement and "Green Party USA" representing their status as a growing political party.

However, a 1996 split in the Greens saw the formation of the National Association of State Green Parties (NASGP). The new group focused on mainstream, conventional political goals and the Greens/Green Party USA pushed left-wing ideas. The NACSGP was formed as a federation of state green parties, meaning that its members were state-level green parties rather than individuals.

The NACSGP convinced attorney and political activist Ralph Nader to run as the party's presidential candidate that same year. American Indian environmentalist and feminist Winona LaDuke joined the ticket as Nader's running mate. Nader's campaign cost a mere $5,000 but managed to get the candidate on the ballots of 22 states. He placed 4th in the election with 0.8 percent of the vote, just behind Ross Perot, who ran on the Reform Party ticket.

But what happened in that famous contested 2000 presidential election? What have the Greens done since then? Find out on the next page.

Green politics go beyond U.S. borders. In fact, the roots of the Green movement in America can be traced to groups in the South Pacific the rise of European Green Parties during the cold war. 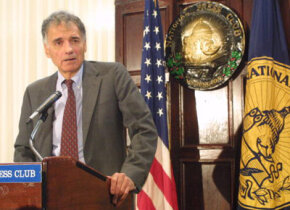 The 2000 presidential election saw the Green Party rise to the forefront of third party politics in the United States. This time around, the Nader/LaDuke campaign raised millions of dollars. By running heavily on an anti-corporate platform, they were able to make the ballot in 44 states and capture 2.7 percent of the vote. Nader ran under the banner of the NACSGP and rejected the additional nomination of the Greens/Green Party USA.

Liberal Democrats who feared Nader would steal away votes from Democratic candidate Al Gore had urged Nader to drop out of the race early in the campaign. The party's response, however, was that Gore differed little from Republican candidate George W. Bush. They emphasized that their goal was to create a permanent third party in the U.S.

But when Gore lost to Bush by a mere (and much contested) 0.5 percent of the vote, many labeled Nader a spoiler. Critics argued that if he had not been there to attract the votes of registered Democrats, his 2.7 percent of the vote would have given Al Gore enough votes to defeat Bush.

Nader defenders, however, argue that the real spoilers in the 2000 election were the U.S. Supreme Court for allegedly allowing "election manipulation" by Florida Republicans, Al Gore for running a "weak campaign" and the Democratic Party itself for not properly suing or pushing for an investigation of the disqualification of 90,000 Florida voters [source: Green Party of the United States].

Despite Nader's 2.7 percent in the 2000 election, the party needed a full 5 percent of the national vote to become eligible for federal matching funds in the 2004 election. Still, Nader's campaign gained the Green Party additional exposure, pushing it ahead of the Reform party as a dominant third party in American politics.

Riding on this success, the NACSGP voted in 2001 to become a unified, national party, changing its name to the Green Party of the United States. This change attracted a large number of members away from the Greens/Green Party USA.

While both Green Parties are still active, the Green Party of the United States claims a larger membership and commands a greater presence among elected officials. Efforts to merge the two groups have been unsuccessful.

Presidential aspirations aside, the party continues to work to cement their role as a vital third party in the U.S. and not follow past notable third parties into obscurity by having their key views absorbed.

For more information on the Green Party and elections, look over the links on the next page.