The Origins of Gerrymandering 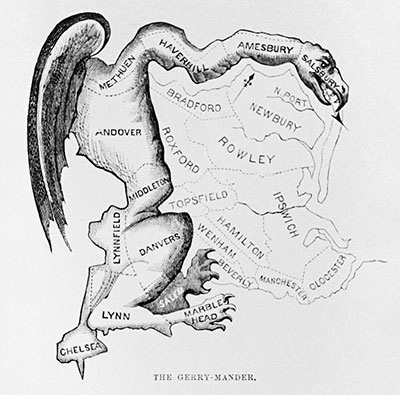 The term 'gerrymander' stems from this Gilbert Stuart cartoon of a twisted Massachusetts electoral district. Stuart thought the district resembled a salamander, and a friend called it a 'Gerry-mander' after Gov. Elbridge Gerry, who approved rearranging district lines for political advantage.
Bettman/Getty Images

Gerrymandering is a sneaky trick with a long and illustrious history, dating back to the beginnings of the nation. In 1788, shortly after Virginia ratified the U.S. Constitution, founding father and former-governor Patrick Henry convinced state legislators to redraw the fifth congressional district in order to force his political foe James Madison to run against James Monroe, whom Henry figured would win. But Henry's scheme backfired when Madison came out on top anyway [source: Barasch].

It got only worse from there. In 1812, Massachusetts Gov. Elbridge Gerry did his part to help his party, the Democratic-Republicans, hang on to the state legislature. He signed into law a bill that created a strangely shaped district designed to make it tough for candidates of the rival Federalist Party to win. On the map, the district looked a bit like a salamander, and a newspaper cartoonist labeled it the "Gerry-mander." The name stuck [sources: Donnelly, Draper, Barasch].

Gerrymandering grew so common and blatant that Congress tried to control it with the Apportionment Act of 1842, which required, among other things, that congressional districts be drawn to be contiguous and compact as possible. But the temptation to use the map to political advantage was too tempting. In the 1880s, the Republican-controlled Congress even engaged in a sort of gerrymandering on a grand scale, carving out two separate states — North and South Dakota — in order to gain more seats in the U.S. Senate [source: Barasch].

Gerrymandering was so effective that both Republicans and Democrats engaged in it. In the 1950s, for example, Democratic legislators in Texas drew what political writer Robert Draper calls "pronouncedly racist maps" in order to deprive African-Americans and Hispanics of their right to representation.

Gerrymandering also flourished because for most of the nation's history, the federal courts didn't take much interest in it, deeming it a political rather than a constitutional problem, which voters could remedy simply by throwing out the party in power. (That view had an inherent flaw, since gerrymandering was intended to keep voters from doing that.) Finally, in 1962, the U.S. Supreme Court ruled in Baker v. Carr that Constitutional challenges could be mounted to redistricting plans [sources: Whitaker, Utm.edu].

Additionally, the passage of the Voting Rights Act of 1965 set up rules to ensure that racial and ethnic minority voters weren't spread out in a way that diluted their political power [source: Barasch]. But efforts to draw maps that gave minorities more political influence sometimes led to even stranger configurations. In the 1990s, for example, North Carolina legislators drew up a congressional district that snaked narrowly across the state in order to pick up pockets of African-American voters [source: Wattson].

That map was thrown out in 1996 when the Supreme Court ruled that even districts drawn to be fair to minority voters should maintain "compactness, contiguity and respect for political subdivisions" [source: Draper].

But up until now, the Supreme Court has yet to agree upon a legal standard that would make it clear when redistricting maps are unconstitutional. The Wisconsin case could change that [source: Fritze].