Dressing as a Geisha 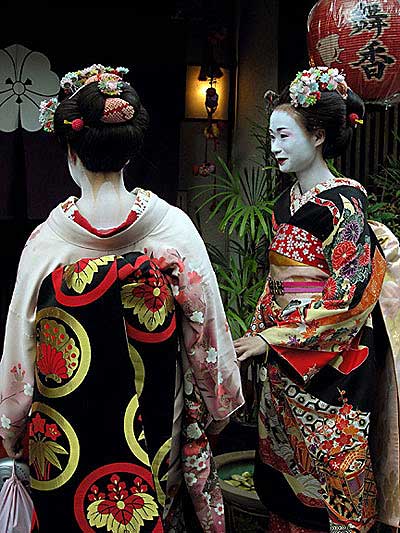 For a geisha, getting ready for work involves hours of preparation. The distinctive appearance of a geisha is part of her allure, but it's not only about beauty and exclusivity. It's also a way to tell the difference between a maiko and a geisha and between a child geisha and an adult geisha. You can tell a lot about a geisha just by looking at her.

Unlike a regular kimono, a geisha kimono exposes her neckline -- in Japanese culture, this is considered the most sensual part of a woman.

Kimono can cost thousands of dollars each. A maiko wears a kimono that has extra long sleeves (they touch the ground when she drops her arms) and is very long, colorful and intricately adorned with embroidery or hand-painted designs. Her collar is red, and her obi is long and wide. She wears tall wooden clogs called okobo to keep her kimono from dragging on the ground. Learning to walk in this outfit without falling over is part of her training.

The white makeup that is a trademark of the geisha was once lead-based and poisonous. Now, it is harmless. If a maiko follows the traditional way of achieving the look, she first applies oil and a layer of wax to her face. This makes the skin perfectly smooth and forms a base to which the white powder can adhere. She then applies red lipstick only to her lower lip. This is a sign that she is an apprentice.

Before becoming an apprentice, a young woman grows her hair very long so that it can be shaped into the elaborate hairstyles of a maiko. She wears at least five different styles, each one signifying a different stage in her apprenticeship. For instance, a new maiko wears a hairstyle called wareshinobu, which incorporates two strands of red ribbon that signify her innocence. An adult maiko wears a style called ofuku. This change was once determined by mizu-age, or a maiko's first sexual experience, but now it is simply a function of time. The switch usually occurs when the apprentice turns 18 or has been working for three years.

Apprentice geisha spend hours at the hairdresser every week to maintain their hairstyle. They sleep on special pillows that have a hole in the middle so they don't ruin their hair while they sleep.

When a maiko becomes a geisha, she switches out her red collar for a white one and her maiko kimono for a geisha kimono.

A geisha kimono is simpler in appearance and easier to deal with. It has shorter sleeves and does not require high clogs to keep it off the ground. A geisha wears zori, which are like flip-flops, and a shorter obi tied in a simple knot. After working for several years, a geisha may chose to wear lighter, "Western-style" makeup instead of the traditional, heavy makeup worn early in her career. A geisha wears variations on the shimada hairstyle and typically wears a series of wigs instead of styling her real hair.

These intricate hairstyles and kimono distinctions mark stages in a geisha's career. Once, they were also a way to tell geisha from prostitutes when prostitution was legal in Japan. If both geisha and prostitutes attended a party, she could look at a woman's hairstyle, kimono or makeup and instantly know which she was.

Ultimately, the appearance, mannerisms and work of a geisha is about pleasing men. But the daily life of a geisha revolves around women.

The Most Difficult Uniform Ever

Every geisha has a dresser -- geisha-style kimono are very difficult to put on correctly, and it's almost impossible for a woman to get into one herself. There are underlayers, overlayers and yards of expensive fabric that must be tucked and folded into place. A maiko obi is so long she can't even hold it off the floor without help.