What is a Geisha? 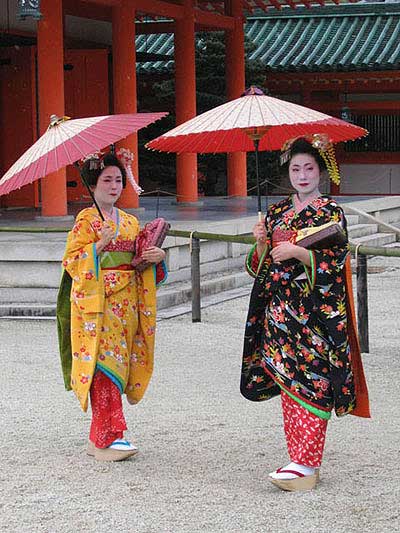 A geisha is a woman highly trained in the arts of music, dance and entertaining. Geisha is Japanese for "person of art." She spends many years learning to play various musical instruments, sing, dance and be the perfect hostess in a party of men. A geisha, when she is working, is just that: the illusion of female perfection.

A geisha's makeup, hair, clothing and manner are calculated to indulge a man's fantasy of the perfect woman, and men pay huge sums of money to have geisha attend to their every whim.

Or, almost every whim.

Many Westerners confuse geisha with prostitutes. Those who understand the intricacies of Japanese culture explain that a geisha is not a prostitute. A true geisha is successful because she projects a sense of unattainable perfection. When men hire geisha to entertain at a party, sex has nothing to do with it. A geisha entertains with singing, music, dance, story-telling, attentiveness and flirtation. She can speak about politics as easily as she can explain the rules of a drinking game. In a time when Japanese wives were excluded from public life in general, geisha were the women who could play the role of attentive female at business gatherings.

The original geisha were men, and they entertained all over Japan -- social restrictions dictated that women could not entertain at a party. These men kept the conversation going, gave artistic performances and flattered guests at parties thrown by noblemen and other members of the upperclass. In the 1700s, women calling themselves geisha first appeared in the "pleasure districts" of Japan. There are many takes on the origins of the female geisha. One has a group of female artists stealing business from prostitutes in the pleasure districts by hiring themselves out to sing and dance at parties. Another one has a failing prostitute taking a job as a geisha to make some extra money, and as a geisha she was a hit. However the female geisha came about, they were a threat to the brothels. Because geisha were not affiliated with the brothels, the people running them received no money from the geisha's wages. In order to curtail the geisha's popularity and get the focus back on registered prostitutes, the government set very strict rules for geisha concerning their style of dress, how and where they could entertain and the hours they could work. To make sure sex was not part of the party, geisha were not allowed to be hired singly. But instead of reducing the geisha's success, these restrictions only made them more desirable.

As time went on, particularly during the poorest times in Japan, the success of the geisha led many impoverished parents to sell their young daughters to a geisha house (okiya). These children trained from the age of five or six to become successful geisha and repay the okiya for the cost of their training. Today, young women choose to become geisha just like they might choose to become doctors. They typically begin their training after junior high school, and the training is rigorous. Only the most dedicated women make it to full geisha status.

Sex in the Flower and Willow World

A geisha may decide to engage in sexual relations with a customer with whom she has developed a special relationship, but this is not part of her job as a geisha, and it is not a one-night stand. A geisha's relationship with a danna (patron) is a long-term one: The ceremony binding a geisha to her danna is similar to the Japanese marriage ceremony, and when a geisha and her danna decide to end their relationship, they undergo another ceremony to make the "divorce" final.