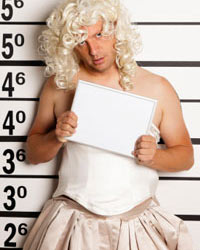 Some of the thieves in this heist dressed as women to disguise themselves.
©iStockphoto.com/Rich Legg

How much: Approximately $107 million

As robberies go, this downtown Paris heist was executed in a relatively genteel, civilized manner. Perhaps that's because it was conducted by women -- or at least, men dressed to look like women.

On Dec. 4, 2008, four gun-toting robbers entered the Harry Winston store and made off with roughly $107 million worth of jewelry and diamonds. That's just short of the record-setting mammoth haul of $127 million in diamonds taken in Antwerp in 2003.

At about 5:30 p.m., the four men -- at least some of whom had donned female clothing and wigs -- sauntered casually into the Winston store, which was right down the street from a Parisian police station. They immediately went into action, menacing employees and customers with handguns.

There's no doubt that the robbers were already familiar with the store and its employees, who they allegedly called by their first names. They also knew the location of secret safes located throughout the store.

Within 20 minutes, the still-at-large criminals had cleared out much of the store's stock, including diamond rings, watches, necklaces and much more. Then, they calmly and quietly exited the store, drove away and were never seen again.

They had a plan, great disguises and a clean getaway. But this next set of diamond-crazed criminals left behind a clue that led to their eventual arrests.