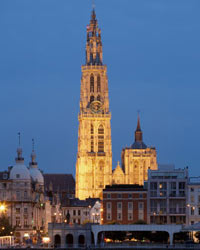 A thief known as "Flomenbaum" made off with approximately $28 million worth of uncut diamonds.
Martin Rogers/Stone/Getty Images

How much: Approximately $100 million

One of the largest diamond heists ever took place in Antwerp, Belgium, in 2003. With a confirmed value of at least $100 million, the complex crime goes down in the history books.

Antwerp is one of the two diamond capitals in the world. The other one is Dubai, in the United Arab Emirates. Eighty percent of the world's uncut gems go through Antwerp, and many of them are stored for various periods in the underground vault of the Antwerp Diamond Center building.

Of the 160 safety deposit boxes where diamond brokers leave their stones (often just overnight) while brokering deals, only 123 were emptied of their contents. The thieves had so many diamonds to carry that they were forced to leave 37 vaults unopened, and Diamond Center employees came in to find loose diamonds strewn about the vault.

At least four people had been planning the theft for years. They rented office space in the building in 2000, analyzed the alarm system and learned how to bypass it. They also obtained keys to the vault and made copies. On the day of the break-in, they recorded over the security cameras and inserted fake tapes into the surveillance system to cover their movements. All of these coordinated actions suggest an inside job, and as it turns out, it was.

The gang was identified as a group known as the School of Turin -- a "brilliant" group of thieves that never uses violence. One member is known as the King of Thieves, and insiders refer to another one as the Magician with the Keys [source: BBC News]. The investigation accordingly led to Italy, and most of the group were arrested by Antwerp police working in conjunction with Italian law enforcement. One of the thieves had left his DNA on a half-eaten sandwich among diamond-carrying bags dumped in a ditch near the crime scene. Another thief's DNA was found in the vault. He had acted as a diamond merchant for years, apparently storing stones in the Diamond Center, and had somehow passed all of the Center's background checks.

Most of the thieves are in prison, but the $100 million worth of diamonds and other gems they stole have never been found. Italian police discovered some of the loot in a vault in Italy and photographed the items for confirmation, but by the time Antwerp authorities arrived to collect the stolen stones, they were gone -- removed from yet another supposedly secure location.

The next one on our list isn't the biggest haul, but it is quite possibly the most impressive. How can you beat the long con?