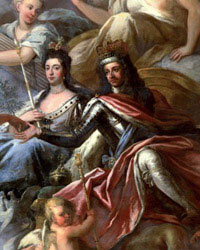 One of the jewels stolen in the heist at The Hague was a wedding gift given by King William III to Queen Mary II of England.
Sir James Thornhill/The Bridgeman Art Library/Getty Images

Where: The Museon Museum of Science, The Hague

How much: Approximately $12 million

In December 2002, thieves pulled off one of the most inexplicable diamond heists of all time. The Museon, a science museum in The Hague, Netherlands, was putting on a phenomenal diamond exhibit intended to educate the public about the gems. There were royal pieces on display, as well as jewelry lent to the Museon by other museums and private collectors.

The most valuable pieces disappeared either Sunday night or Monday morning. Because the museum is closed on Mondays, the theft went undetected for at least a day. Museum officials came in on Tuesday to find that six of the exhibit's 28 display cases were empty.

The Museon had 24-hour security guards monitoring entrances and exits, as well as 24-hour surveillance-camera footage that covered every square inch of the exhibit. The cabinets were all in a motion-detection zone, and the displays that housed the most valuable pieces (the displays the thieves emptied) were made of reinforced glass.

To this day, no one has any idea how the heist happened. Nothing showed up on the video footage, the guards never saw a thing, the motion sensors never went off and the display cabinets showed no evidence of tampering. The only signs of a break-in were a single smashed window leading into the museum -- and the empty cases. The flawlessness of the heist suggests inside information, but investigators have been unable to make any connection between the robbery and museum staff.

The Museon hasn't released details about exactly which jewels were stolen, but insiders note that a wedding gift given by King William III to Queen Mary II of England in the 1600s was among the Museon's prized pieces [source: NIS News Bulletin]. The museum eventually put a price tag of about $12 million on the robbery, but since many of the stolen pieces had historical significance, the haul is really priceless.

The gems will probably never turn up for auction because they're too famous to go unnoticed by anyone in the jewelry world. And after several years of investigation without a single lead, detectives have closed the case.

If invisible thieves can get away with $12 million in stones, what do the very visible, well-armed and dangerous types go home with? No. 6 in our countdown is a possible record breaker.