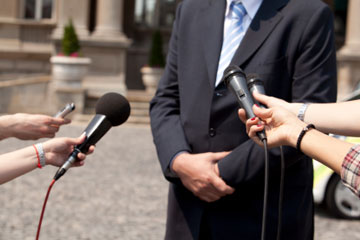 Electronic news gathering changed the way we receive information from around the world.
©iStockphoto.com/wellphoto

Ever since the advent of television, news has been a vital part of programming. Like radio news, it allowed audiences to get news as it was breaking rather than having to wait for the newspaper. But TV also had the advantage over both radio and newspaper of being able to beam film footage of a newsworthy event into the audience's living rooms.

However, the problem with early TV news was that film footage wasn't available until hours after an event occurred. Thus watching news break on the television simply consisted of a talking head behind a desk in a studio reporting what was happening -- not much better than simply listening to the coverage on the radio. Live footage on television was a rare event indeed, reserved for huge, planned events, like the coronation of Elizabeth II in 1953. Live feeds took planning, big equipment and circuits provided by the telephone company to transmit the feed.

It wasn't until electronic news gathering (ENG) developed in the 1970s and '80s that TV news crews could quickly set up live video signals to send back to the studio and into people's homes, drastically changing the face of television news. ENG refers to the electronic technologies that allow news crews to report from remote locations outside a studio. Before ENG came about, TV news footage shot outside of the studio was recorded on film, which had to be brought back to the studio for time-consuming processing and editing before it was ready to air. Editing for instance, involved manual cutting and spicing of the film by a trained employee. Often, an anchor reporting a late-breaking story on the 6 o'clock news would have to end a story by promising the audience "film at 11."

The BBC attempted to streamline this process as early as 1962 with the Mobile Film Processing Unit using three different vehicles -- a processing truck, an editing truck and a truck for converting film projection to television. The trucks would race to cover a story and then send the footage through microwave links to the studio. But it turned out that this so-called "three-ring circus" of trucks didn't work so well and was more trouble than it was worth, only lasting a few years [source: Higgins].

The real advancement that ushered in the age of ENG was videotape. We spoke with Jonathan Higgins, an expert in the field of ENG and author of two books on the subject, who helped explain how ENG changed news reporting.