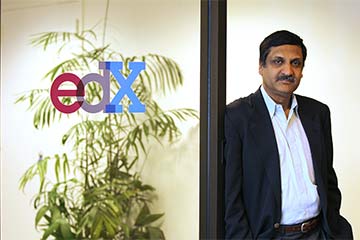 While the Internet has proven immensely powerful for the massive distribution of cat videos, it has not fully realized its potential as an educational resource. Sure, colleges and universities around the world offer online classes, but most cost hundreds or thousands of dollars each. In response, a movement was born in 2008 to create massively open online classes, or MOOCs, in which courses from some of the world's finest universities would be offered online for free. Education was being democratized.

The attraction of taking a free college class taught by a renowned Harvard professor is undeniable. Before the advent of edX, your only options were to apply and get accepted to Harvard -- and cough up $65,000 per year -- or take an online class through Harvard Extension for the slightly more affordable price of $1,250 per undergrad course.

With edX, you can choose a class like David J. Malan's wildly popular "CS50 Introduction to Computer Science" and watch every lecture online, complete with graded homework assignments and exams, and walk away with a marketable new skill and a whole new perspective on the art of programming. For free!

What you will not walk away with from an edX course is an actual degree or even college credit. Critics of MOOCs point to dismal completion rates — only 0.8 percent of edX students who register for Introduction to Computer Science (the most popular course on the list) actually finish it — and argue that the mere dissemination of information is not the same as education [sources: Rees, Woolf]. True education, they say, requires a deep level of personal engagement that's impossible to replicate with message boards and auto-graded quizzes [source: Kolowich].

Keep reading to learn how it looks and feels to take an edX class, and how these free online courses could launch a new business model for higher education. 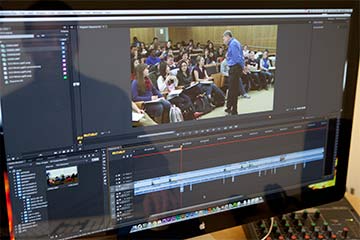 An edX video editor works on a video of an MIT biology class. EdX classes are a combination of videos, quizzes, discussions and short essays -- all online.
Melanie Stetson Freeman/The Christian Science Monitor via Getty Images

All edX classes are found at edx.org. Some have set start and end dates, while others can be taken anytime. The edX home page lists upcoming classes with links that allow you to view all courses or browse by topic. Clicking on a title will display a course overview, an introductory video and information about ways to take it. All courses are free to audit, but some allow you to pursue a Verified Certificate of Achievement for a minimum fee ($50 to $90). These certificates are not college credit, but could be useful on a resume.

To register for a class, you need to create an account or log in with Facebook or Google+. To familiarize yourself with the edX online learning experience, edX suggests registering for "DemoX," a 30-minute introduction to course tools, videos, interactive elements, grading and social media integration.

All course content lives on a tab called courseware. Courses are organized by week, and within each week are tabs for lessons and homework. When you click on "lessons," you begin that week's learning sequence, a series of videos, quizzes and interactive labs called "units" that teach bite-sized concepts and test your knowledge. Homework includes problem sets and readings that support that week's content. Once you complete all units and homework, you move on to the next week.

Every question you answer -- both during lessons and in homework assignments -- is graded, as are any midterms and final exams. Almost all grading is done automatically by software called Open Response Assessment using rubrics and algorithms [source: Winterhalter]. You can monitor your grade performance in the "progress" tab, although all final grades are pass/fail.

The meat of edX courses is video; professionally produced clips complete with graphics and special effects delivered by star professors at each university. The edX video player is tricked out with some cool features, including playback speed controls (from half-speed slo-mo to double-time) and a scrolling transcript of everything the professor is saying. Click on a word in the transcript and you jump directly to that moment in the video.

EdX promotes the social dimension of online learning, urging classmates to join Facebook and Google+ groups for each course, or even organizing local in-person meetups. Within each course is a discussion tab where students, professors and teaching assistants can post questions and comments on a message board. Some courses also support a wiki where current and former students can create a shared knowledge base.

EdX is an education nonprofit that gives away its products for free to millions of students worldwide. There is no advertising on the edX website or during its course videos. Sure, you can pay $50 to $90 to receive a certificate of completion for a course, but why buy the cow when you can get the milk for free? All of this brings up the question that hounded Facebook and Google in their early days: How exactly will you make money?

When edX launched in 2012, both MIT and Harvard kicked in $30 million in seed money [source: Hashmi and Shih]. Two years later, most of the nonprofit's revenue comes from universities who sign partnership agreements with edX to create more edX courses. There are two types of deals for edX partners [source: Kolowich]:

Like its for-profit competition, Coursera and Udacity, edX has tested the idea of working with universities to create blended classes, in which online videos and homework are supplemented by in-class discussions. In one pilot program, San Jose State University (SJSU) blended an edX engineering course on circuits and electronics created by MIT with its own on-campus engineering class. Pass rates for the course jumped from 55 percent of 91 percent [source: Lopes Harris].

EdX didn't charge SJSU for the use of that pilot class, but the idea would be to charge universities a group rate for using edX courses in for-credit classes. Coursera, for example, has signed deals with universities in which the school pays $25 per student for the first 500 students to sign up for a for-credit edX course, then $15 for each additional student [source: Kolowich].

Another potentially lucrative arena for edX is corporate training. In March 2014, edX offered a pilot course on big data for 3,500 IT professionals from 2,000 organizations that grossed nearly $1.75 million. In October, edX announced a suite of professional development courses in cybersecurity, energy and entrepreneurship for up to $1,249 per student [source: Korn].

For all of the hype and potential profits, are MOOCs like edX the future of higher education? We'll tackle that question next.

EdX offers 29 high school courses like AP biology, AP computer science, AP language and composition, and introductory classes in computer science and psychology. The free courses are meant to close the "readiness gap" for students applying to college. There's even a class called "The Road to Selective College Admissions" for kids who dream of attending the real Harvard.

The Future of edX

The elevator pitch for MOOCs like edX and Coursera is that free online courses from elite universities will give millions of people around the world access to a level of education they could only dream of before. In the wildest MOOC-fueled fantasies, teens in the slums of Calcutta and Lagos enroll in edX courses and raise their families out of poverty as engineers and software programmers. But the real future of ventures like edX will probably be far less revolutionary.

For one thing, edX courses have proven wildly successful at registering students, but far less successful at holding their attention. In the summer of 2014, edX released data on 476,532 students who took one or more of 13 specific edX courses in 2013. Of that group, 77 percent took only one class, and of those classes, the highest completion rate was 7.5 percent for a class called Challenges of Global Poverty. The other 12 classes had completion rates of 4.4 percent or less [source: Woolf].

Fine, edX may not become the great democratizer of education for the world, but perhaps it can still revolutionize the higher education in America, right? When MOOCs first hit the scene, the education community was abuzz with excitement over blended classes, so-called flipped classrooms— in which lectures are viewed as homework and class time is for labs and discussions. State legislatures even began crafting bills to speed the approval of MOOCs for college credit in state-run universities [source: Kolowich].

But that was before college professors began protesting the embrace of MOOCs as a ploy to trim faculty and cut public university funding. At San Jose State University, where the engineering professor had such success with a blended edX class, the philosophy department publically refused to use a popular edX class taught by a Harvard professor because it replaced faculty with "cheap online education" [source: Parry].

Cries of the "MacDonaldization" of education have shelved attempts to speed through for-credit MOOCs and lowered the lofty expectations of MOOC providers like edX. Instead of being the creators and distributors of course content, it's likely that edX, with its open-source platform, will offer its services as a consultant to universities and governments that want to use its "free" product. EdX already signed such agreements with China and France where the countries will pay edX for ongoing advice and technical support while using its code for their own MOOCs [source: Meyer].

For now, nonprofit edX has a leg up on its competitors; with MIT and Harvard's combined endowments topping $40 billion, it doesn't have to depend on venture capital for its survival [source: Haynie]. EdX will continue to publish brilliant, free courses while searching for its place in the higher education universe.

For lots more information on MOOCs, online education and the high costs of college, check out the related HowStuffWorks links on the next page.

I am now one of the hundreds of thousands of people who have started an edX course and failed to finish it. As research for this article, I registered for Introduction to Computer Science and made it all the way through unit one of week one. It's not that the material was boring. Far from it; it was the most clearly presented and fascinating introduction to computer science I could conceive. I'm just not interested in making it a priority to devote the dozens of hours necessary to complete the course. Like many others who are drawn to edX, I already have a bachelor's degree and am mostly interested in MOOCs to satisfy a curiosity. But I can also imagine million of people not like me at all, who see MOOCs like edX as a portal to untold opportunities. For their sake, I hope hundreds of thousands of edX fantasies come true.