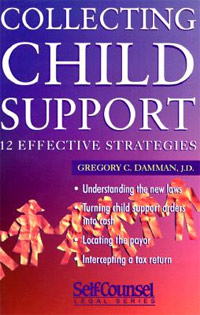 There are many books and Web sites that help you understand and utilize new laws regarding child support.
Photo courtesy Amazon.com

Child support is money paid to the custodial parent to pay for reasonable needs of the child or children for health, education and other maintenance. In most states, child support is determined based on the combined incomes of both parents and sometimes also takes into consideration fixed expenses such as a mortgage, car payments and utilities. A formula is used based on total gross income. In North Carolina, for example, if the parents have a combined monthly gross income of $10,000, the child support required for one child is $1,064, for two children is $1,423 and for three children is $1,583. This amount is then divided based on each spouse's earnings and financial situation. Either spouse can request higher or lower payments, and a judge decides if more or less money is warranted based on the circumstances.

Sometimes, additional support may be requested to pay for extras such as private school, extracurricular expenses, summer camp, college, life insurance for the "paying" parent and even extensions beyond age 18. Because these extras are beyond what the law imposes, they are usually incorporated into separation agreements. If the terms of the separation agreement have been signed by both parents and are incorporated into a consent order, then the court can enforce the extra support.

When one spouse has given up earning potential in order to raise the children, the other spouse needs to compensate him or her. Judges grant alimony by considering such things as:

State laws vary in which of these things a judge might consider and how much weight each will have. In most states, though, the length of the marriage plays a significant role.

How long alimony is paid is another consideration. Typically, it is a temporary term, but occasionally it can be required for life. This usually depends on how long it will reasonably take the spouse receiving alimony to reenter the job market. Alimony may also be decreased (but not eliminated) as the recipient's earning potential increases.

As you can see, divorce can be a very complex process. To learn more about divorce and related topics, check out the links on the next page.

In way too many cases, non-custodial spouses quit paying child support. The custodial parent in this case has the right to use legal means to get the parent to pay up. The Punishment Act of 1998 stiffened the penalties for non-payment, and non-payment of child support may become a federal criminal offense under certain conditions. It is always a federal offense to move to another state in order to avoid paying child support. Prison terms and fines can be levied.