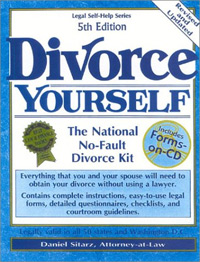 As we discussed on the previous page, there are several ways to go about getting a divorce, and how much it costs varies greatly. According to Divorce Wizards, a litigated divorce will usually cost more than $30,000, while a mediated divorce can cost less than $5,000. People can save considerable money (and anguish) by agreeing to a settlement and not going to court. Mediation, with or without the help of an attorney, is almost always the least expensive way to go if you need outside guidance.

You can also do it all yourself, known as Pro Se. According to Daniel Sitarz, the attorney who wrote "Divorce Yourself: The National No-Fault Divorce Kit," people can draft their own settlement agreements, fill out the forms and file for divorce without the help an attorney. That is, if they can agree on the settlement.

However, not all cases can be settled without the help and advice of a divorce attorney. Disagreements over property, spousal support and child custody have to be settled, and if a mediator or collaborative attorney can't help resolve the issue, then the only thing left is to take it before a judge. You can represent yourself in the case, but this is a bad idea if your spouse has hired an attorney, because you'll be starting out at a disadvantage. According to most experts, both spouses using the same attorney is also a bad idea. It creates a conflict of interest for the attorney, and both sides can't be represented fairly.

Overview of the Process

The process of getting divorced varies depending on several factors. First of all, the location determines a lot of what is required. The type of divorce being sought and whether or not there are children involved also changes the process. If there are no children under 18 and there is no disagreement about distribution of property, then a simplified divorce is often possible. When there are children involved and when there is disagreement about the settlement, then it gets stickier. Many courts require childcare classes for dealing with children after a divorce, and some also require couples to go through mediation to work through disputes. The basic steps are as follows:

In the following sections, we'll walk through each of these steps and examine the various options available at each stage in the divorce process, starting with separation.