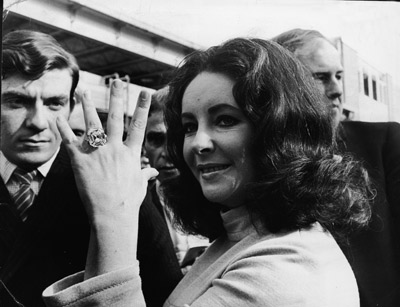 In 1959, the FBI didn't just recover Vera Krupp's huge, recognizable center stone; th­ey also recovered the small side stones. There's a network that traces the buying and selling of diamonds -- especially cut stones -- around the world.

Diamonds aren't easy to sell -- even when you actually own them. Jewelry stores will almost never buy back diamonds they've sold to people, mostly because the price they'd offer would reveal the unfathomable retail mark-up on the stones. When Elizabeth Taylor tried to sell a 79-carat diamond ring, she got half the price she asked. It had been a gift from her two-time husband Richard Burton, and when she married John Warner in 1979, she put it up for auction for $4 million. There were no takers. She eventually sold it for $2 million and barely broke even on the cost of insuring it all those years. Incidentally, Liz Taylor also ended up with Vera Krupp's diamond ring, another gift from Richard Burton. And she still owns it today [source: The Age].

So imagine what's it's like to try to sell a stolen diamond with no accompanying papers. There are unscrupulous jewelers and individuals out there who are willing to buy stolen gems. And there are enough of them to make a professional heist worth the risk. But the thieves had better identify the buyers beforehand, as shopping the jewels around is likely to get them caught. If "Flomenbaum" ever tries to sell, say, the 133-carat uncut stone he stole from ABN Amro, he'll be facing an uphill battle. John William Hagenson was caught trying to sell a mere 33-carat stone.

Hagenson's the thief who ripped the ring off Vera Krupp's finger in 1959, and the FBI tracked him from Las Vegas to Louisiana. They actually knew who they were looking for: Hagenson had committed a very similar crime in California. And after they found Hagenson, they found the diamond, too -- in New Jersey. The FBI has informants in the diamond trade, and one tipped off the Newark field office when a 33-carat stone turned up for sale. The FBI recovered the side stones from a jeweler in St. Louis. Krupp was able to put her whole ring back together.

While a 33-carat diamond isn't something you see every day, surely there's more than one in the world. So how'd the cops know it belonged to Krupp? Find out in the next section.

The FBI believes that al-Qaeda sunk its money into "conflict diamonds" before the Sept. 11 attacks on the United States, anticipating the freezing of their bank accounts. Al-Qaeda and other terrorist groups are known to have ties to the rebels who control the diamond trade in Sierra Leone, and use those connections to illicitly sell diamonds to fund their operations and to hide and launder money [source: Washington Post].