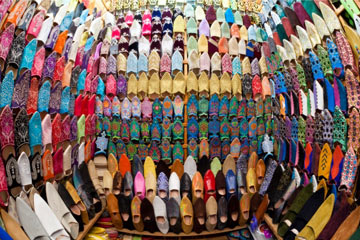 Modest dress is the norm here, as Morocco is an Islamic country. But it's a progressive Islamic country, so there's a certain amount of latitude in what people wear as well, though dress is definitely more conservative in rural areas than it is in the cities [source: Hey Morocco]. Traditional women's dress generally consists of a djellaba (a long, loose robe), a button-down blouse called a kaftan and a headscarf. Modern women may don more form-fitting, shorter djellabas, and/or pair them with jeans, and some don't wear headscarves. Footwear is a babouche, or leather slipper without a heel. Women's babouches come in a wide variety of colors and decorations. High-heeled sandals are another popular choice.

Interestingly, while Western wear was increasingly popular in the 1980s and 1990s, and more and more Moroccan women were foregoing headscarves, today Moroccan women are embracing the headscarf as a way to symbolize their pride in being Muslim, much as Muslims in other Islamic countries are doing. But this doesn't mean they're becoming more conservative overall in their dress. The headscarves are viewed as a fun, decorative accessory, and come in many pretty colors and patterns. Furthermore, young women in particular often pair their headscarves with Western attire such as tight jeans, sexy tops and designer shades [source: Vagabond Journey].

Men have more latitude in their dress. It doesn't matter much whether they wear Western attire or traditional Moroccan garb -- jeans, for example, vs. a traditional djallaba, which is worn by both sexes -- instead, it's the quality of their clothing that takes priority. Generally speaking, of course, Moroccan men are image-conscious to a fault, and take a lot of time primping before they go out. Their clothes must always be clean, neatly pressed and the best quality they can afford. Wealthier men, in fact, often have their clothing hand-tailored from fine fabrics. (But not from silk, which is considered too effeminate for men.) Moroccan men generally wear polished shoes or babouches, depending on whether they're wearing Western clothing or traditional Moroccan outfits, but they rarely wear sandals, and always have neatly trimmed hair. Beards today are associated with fundamentalist Muslims, so most Moroccan men usually don't have them, although moustaches and goatees are fine. The kaftans and felt caps called fezzes that were once standard attire for males are today worn mostly by older men [source: Costa Sur].

With all of that Moroccan coastline to enjoy, what about beach attire? Moroccans are allowed to wear swimsuits at the beach, but only reveal them once they've arrived.

Natives of Morocco may be relatively conservative in terms of clothing style, but when it comes to architecture, they pull out all the stops.