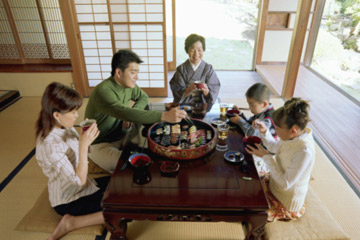 A Japanese family at dinner in their traditional wood and paper house.
Ryan McVay/Lifesize/Thinkstock

In Japan, it's expected for a traditional wooden and paper house to last about 20 years (30 years for those with concrete exteriors) before requiring either extensive repairs or a complete rebuild [source: Harada]. Because of this, when this type of house is purchased in Japan, it tends to depreciate quickly. With its clean, simple lines and sloped roofs, these homes were inspired by Buddhist temples and traditional Chinese architecture, becoming common during the Edo period (1600s). Most Japanese still live in single-family homes that follow the traditional style, but some live in more modern, Western-style houses as well as apartments. Building codes require that houses comprise one or two stories. Most do not have central heating or air conditioning; they use space heaters or individual cooling units.

The entry (genkan), kitchen (daidokoro), bath room (sento) and toilet room (benjo) are usually the only specific-use rooms, which are arranged off one large main area called the ima. Hallways are wood-floored, while thick straw mats called tatami cover the floors in the rest of the house. The rooms are divided by fusuma, interchangeable wood and paper doors. There are generally no rooms called bedrooms or other types of living spaces in the house; these rooms are separated by lighter wood and paper sliding screens called shoji that allow light to pass through. Whenever a larger or smaller space is needed, you can simply remove or add more shoji. More modern houses may have designated bedrooms and living areas as well as all-wooden floors and Western-style furniture, but still retain elements of the traditional home.

Regular shoes are never worn inside a traditional Japanese home; this is another echo of the Shinto philosophy of cleanliness, as well as practical when your floors are straw mats. and most furniture is low on the floor. Instead, outdoor shoes these are left in the genkan and slippers are worn (there are also separate slippers to wear to the toilet, to keep your other slippers clean). Since the traditional soaking bath is about relaxation and not cleanliness for the Japanese, you would never find a toilet in the same room as a bathtub (ofuro). Besides the tub, the sento also has a separate area to shower off dirt before bathing. The sento may also be a waterproof room to make cleaning it easier. The benjo is usually a tiny space and could contain either a modern bidet-style toilet or a squat toilet. Japanese kitchens are typically equipped with a one or two burner gas range, a broiler, a microwave and a small refrigerator.

Another element you might find accompanying a traditional Japanese home/transition from homes to gardens…Traditional Japanese gardens can be found outside private homes as well as public spaces. There are many different types, but most contain the same basic elements and emphasize Zen Buddhist ideals of tranquility and contemplation. Typically, the gardens are enclosed, with fencing or hedges. If at a private residence, the house is often set in the center of the garden for maximum viewing potential. Water is also a necessary element (although there are all-stone and dry gardens as well). Of course, the water may not always be from a natural source; constructed ponds and water basins are common but must be built of natural materials to fit into the Zen philosophy. Flowing water sources should run from east to west, so that the path of the sun follows the water. Bamboo is often used to replenish the water supply. Japanese gardens are green year-round, with flowering plants only in the spring. There is generally more emphasis on stones and their placement than the plants. Not only are they used for walkways, they are also placed in symbolic groupings.

Traditional Japanese gardens are also important as settings for the tea ceremony. Read on to learn about this unique cultural phenomenon that also incorporates food, art and entertainment.