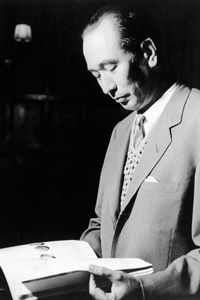 Kurosawa, regarded as one of the world's greatest filmmakers.
Keystone/Hulton Archive/Getty Images

In terms of both age and output, the Japanese film industry rivals that of the United States -- it is the fourth largest in the world in the number of movies produced. The first silent film produced in Japan was shown in 1897, and silent films continued to be made well into the 1930s. Many of the earliest movies were "ghost films" featuring spirits and the supernatural, known as yurei. Period pieces, or jidaigeki, featured stories from the Edo period, when Japan was ruled by the shogunate. Early film in Japan was also influenced by kabuki and bunraku; in 1899, a short film called "Momijigari" showcased a performance by two famous kabuki actors.

The introduction of the "talkie" in 1930 also meant more experimental and avant-garde works. Socially-conscious movies known as "tendency films" were a natural expression of left-wing political movements, government dissent and labor-union organizing in the 1920s and 1930s. These were heavily censored and eventually banned as militarism was on the rise in Japan. The government gained control over the film industry in the late 1930s and made documentaries about real life in Japan and propaganda films to showcase the country as an invincible military power.

In the late 1940s, influential filmmaker Akira Kurosawa wrote and directed his first film, "Sugata Sanshiro." The golden age of Japanese film followed in the 1950s, including films by Kurosawa as well as Yasujiro Ozu and Hiroshi Inagaki that garnered worldwide acclaim. Samurai films, as well as the kaiju, or monster films, also dominated. "Gojira" (translated into English as "Godzilla") is the first and best-known of the latter genre, while Kurosawa's epic "Seven Samurai" is often considered one of the best films ever made. The ninja and the yakuza (Japanese-style mafia) genres made their appearance in the 1960s and 1970s. Also notable in 1970s Japanese film is the introduction of the "pink film" -- softcore erotic films with a special emphasis on aesthetics.

Although it had been in existence almost since the beginning of Japanese cinema, the ghost film, or yurei, became popular in Western culture in the 1990s. Known as J-horror, movies in this genre are psychological thrillers and contain elements of suspense and audience anticipation. Themes focus on elements of traditional Japanese folklore, such as yokai (spirits, demons and monsters). Japan is also well-known for its wide variety of animated productions called anime, which incorporate other genres such as fantasy, science fiction, action and horror. Hayao Miyazaki produced "Porco Rosso" and "Princess Mononoke", which were more popular in Japan than movies like "E.T" and "Titanic." Today, anime movies make up more than half of all films produced in Japan.

In the next section, we'll step back from the world of art and entertainment and into the traditional Japanese home and garden.