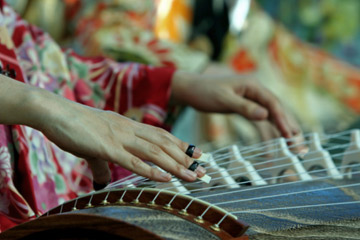 A woman plays the koto, the national instrument of Japan, which is a whopping six feet long (1.83 meteres) and has 13 strings.
iStockphoto/Thinkstock

Japanese art -- like many of its other traditions -- has been heavily influenced by concepts imported from China, as well as Buddhist philosophies. The earliest examples of Japanese art, however, come from indigenous peoples who first arrived in Japan more than 10,000 years ago. These include pottery and other functional ceramics. The most prolific form of fine art in Japan, however, is painting, with its roots in brush-based writing. Chinese characters, or kanji, were borrowed and adapted to the Japanese language in the 5th century A.D. along with the calligraphic writing style. The discipline required to form the flowing characters perfectly became known as the art of shodo. The brush strokes are more than words - -they're an expression of one's mindset and capture a specific moment in time. Although pens have been in use for everyday writing since Japan modernized, children are still taught shodo in school and through private lessons.

Many of the earliest Japanese paintings can be found in Buddhist temples dating to 710 B.C. and depict Buddha's life, as well as other religious iconography. As varying sects of Buddhism rose to prominence, landscape-based paintings appeared on house screens and scrolls, known as Yamato-e (Japanese-style painting). "Other types of scroll painting include emakimono, long picture scrolls that also tell a story. One of the most famous of these is the Genji Monogatari Emaki. This oldest surviving non-Buddhist scroll in Japanese history dates to the early 12th century A.D. and depicts scenes from the novel "The Tale of Genji."

During the medieval age, bold screens and sliding doors painted for the castles of the elite warrior class showcased a wide variety of animals and nature spirits. In contrast, Zen Buddhism's influence in the 14th century A.D. introduced a more subdued, monochromatic style known as ink painting. Traditional sculpture in Japan, using clay, wood or other materials, was also religious in nature, showing either Buddhist iconography or Shinto deities. Other visual arts, such as ukiyo-e (woodblock printing), depict a "floating world" full of beauty and pleasure. "The Great Wave off Kanagawa" by Hokusai is one of the best-known examples of Japanese art in the world.

Speaking of pleasure, traditional Japanese music, known as hogaku, is considered a national treasure. Prior to World War II, Japanese girls were routinely trained in playing courtly and traditional styles of music. While many of the latter are known country-wide, in the modern era, geisha and entertainers are generally the only people still learning the traditional instruments. These include stringed instruments such as the shamisen, a small lute, and the koto, a six-foot-long flat stringed instrument that vaguely resembles a guitar sans neck; wind instruments like the shakuhachi, a bamboo flute; and various types of drums. The music itself can be classified by its purpose. For example, the oldest type of traditional music, gagaku, was originally written and performed solely in imperial courts, while theatrical music is composed and played specifically for theater such as noh or kabuki.

Speaking of theater, we'll catch some (traditional) Japanese theater in the next section.