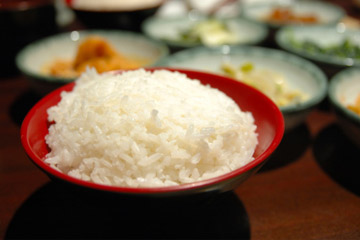 Rice is the main staple of Japanese cuisine and was traditionally eaten three times a day.
iStockphoto/Thinkstock

Japanese food isn't just sushi, although the main components of sushi -- seafood, rice, seaweed, soy products, and pickled or salted condiments -- are found in most every traditional Japanese meal. The influence of Buddhism further ingrained the natural preference for seafood -- it is an island nation, after all --, as consumption of other animal proteins was prohibited by imperial degree at various times in history. Chopsticks were also brought to Japan from China and became the preferred eating utensil by the 9th century A.D.

Rice was first cultivated in Japan during the Heian period (784 to 1185 A.D.) as the society shifted from hunter-gatherer to agricultural. It's perfectly suited to being grown in small areas -- including on hills and terraces and became the main grain, traditionally eaten three times a day at the minimum. The Japanese generally prefer polished, short-grained white rice, which is very sticky. There are many different strains of rice with subtleties in flavor. In addition to being eaten as part of sushi or by itself, rice is also made into noodles, crackers, cakes, sweets and sake.

Rice is usually cooked in an electric rice cooker, while other foods are prepared on gas burners. Every way of preparing food that you can think of -- with the exception of baking, because most Japanese homes don't have ovens -- is employed. Some well-known types of cooking include tempura, lightly battered and fried meat and vegetables; teriyaki, grilled or broiled meat in a sweet sauce; and sukiyaki, a winter dish in which sliced beef and other ingredients are simmered in broth.

A traditional Japanese meal, especially dinner, tends to be low-fat but high in sodium. The emphasis is on very fresh, high-quality, seasonal ingredients -- although Western foods and more convenience foods have become common. Soup, usually the first course, is made with dashi broth, which typically contains kombu (kelp) and katsuobushi (preserved tuna flakes). Rice is the main shushoku (staple food), although the Japanese also eat noodles made from wheat or buckwheat. Thin buckwheat noodles are known as soba, and udon are thicker wheat noodles.

Rather than one "main" dish, several different dishes made from meat, poultry, eggs, fish, seafood, tofu and vegetables accompany the rice. The Japanese use salt, pepper and sugar as seasoning, but they also flavor their foods with sesame oil, miso (fermented bean paste) and soy sauce. Dessert as a separate course isn't a typical Japanese concept; sweets, or wagashi, are eaten with tea or as part of the meal and are usually made of rice flour, fruit or beans. Tea, of course, has its own ceremonial place but is served at meals as well.

Bentos, the traditional Japanese box lunch, were once only the labor of Japanese housewives, who worked hard to carefully pack an attractive, healthy and appealing meal for their husbands and children. Today, they can be bought from vending machines and convenience stores, but creating a beautiful bento is still considered an art. These sectioned containers typically hold fish or meat, rice, and one or more vegetables.

Breakfast in Japan used to include rice, fish and other foods that we don't think of as traditional for a morning meal. Today, it tends to be Western -- things like eggs, toast, and coffee -- because it's quicker and easierwhen you have a long commute to work like many Japanese. The same is true for clothes.

Next, we'll check out the quintessential, traditional Japanese garment.