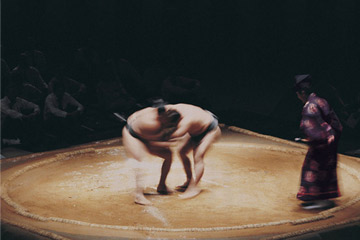 Sumo wrestlers in the ring during a tournament.
Stockbyte/Thinkstock

The national sport in Japan is not indigenous to the country -- it's baseball. A student returning home from his studies in America introduced the sport to his friends in 1878, and by the early 1900s, universities across the country had baseball teams. Formed in 1920, the Nippon Professional Baseball Association today comprises two leagues: Pacific and Central. The 144-game season culminates in a championship held in the fall. Japanese baseball differs from American baseball in several ways. The field, baseball and strike zone are all smaller. Games never go longer than 12 innings, and as a result, tie games are allowed.

Sumo is second to baseball in popularity as a spectator sport. It originated about 300 years ago and was associated with Shinto as a symbolic way to "wrestle" spirits. During the Heian period (794-1185), sumo wrestlers were used to demonstrate physical strength (as well as solve political disputes) in imperial courts. Sumo as a professional sport became popular during the 16th-century Edo period, and today professional wrestlers live a very proscribed life together in houses called stables, where they adhere to strict customs. Everything from the meals that they eat (a protein-rich stew called chankonabe), to their hairstyle (a samurai-style topknot) and the clothes they wear (kimono and geta) are set by the Japan Sumo Association. Sumo matches are won by the first loincloth-clad wrestler who can push the other outside of a ring. The other way to win in sumo is for one wrestler to touch the ground first with a part of his body other than his feet. Sumo matches can last from a few seconds up to a few minutes.

Martial arts have long been the most dominant type of sports in Japanese history. Many have pre-historic roots or were influenced by the samurai, a class of military nobility in the emperor's service that existed in Japan from the 1200s until the mid-1800s. Japanese martial arts are as much (or more) about spirituality, discipline, morality and strengthening the mind as they are about using strength and skill to attack and defend against an opponent. The five main types of martial arts still in practice in Japan today are all based on earlier forms or even combinations of earlier styles of martial arts. These include:

One pattern is apparent all traditions we've discussed in this article -- although they may have been heavily influenced initially by outside sources, the Japanese have a distinct way of making things their own. Their insular, rule-based culture can be a huge source of frustration and confusion to outsiders, but it's also endlessly fascinating. The most important thing that an outsider can take away from an article on Japanese traditions is that there's so much more to learn.

To learn more about the Japanese traditions discussed here and related topics, check out the links below.