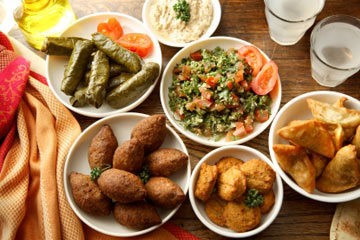 A hot, dry climate sets the tone for the Greek menu, which relies heavily on fresh food. Fishermen pluck an array of seafood from the Mediterranean. Farmers cultivate lemons, eggplant, artichokes and other fresh fruits and vegetables. Although Greeks don't eat each as much meat as some other cultures, they still create mouthwatering lamb, pork and chicken dishes. To satisfy a sweet tooth, Greeks layer nuts and honey into thin sheets of phyllo dough to make sweet snacks.

The most important food in Greece may be the olive. The olive can be traced back to the Bronze Age (3150 to 1200 B.C.E.) in eastern coastal Mediterranean areas, but it migrated to Greece's first civilization, the Minoans, around 1700 B.C.E. The olive tree, which grows well in arid climates and can flourish in bad soil, has played an important role in Greek society due to its use in lamp fuel, anointing rituals and pharmaceuticals. Today, Greeks grow many varieties of olives, from large, black Kalamata olives to the Cracked Green variety. Olive oil makes an appearance in almost every dish, and a handful of marinated Kalamata olives is a popular snack.

Geography has also influenced food traditions by dictating the availability of certain items. Greece is a very mountainous country, particularly the northern regions of Epiors, Macedonia and Thrace. These areas lend themselves well to herding ruminant livestock, particularly sheep, since those animals don't need as much pastureland as others to survive [Source: Sintori, et al]. Sheep help farmers produce plenty of meat, cheese and fresh, thick Greek yogurt. While vegetable-laden dishes like the eggplant-based moussaka can be found all over the country, the eggplants from Leonidion in the southeast Peoponnese are particularly prized and celebrated with their own festivals [Source: Frommer's].

Greeks love socializing, and traditionally, they socialize over a drink. Be it coffee or a nip of ouzo -- an anise-flavored spirit distilled from grapes, figs or raisins and blended with spices and sugar -- a tasty local beverage provides a way for Greeks to linger at a table and enjoy each other's company.

And, of course, you can't sip a beverage without having a little something to eat. In Greece, a selection of bite-sized appetizers -- known collectively as mezé -- often come grouped together on a platter so that people can share and enjoy them. A mezethakia platter usually offers a variety of tastes, textures and colors and includes items such as cheese, radishes, almonds, figs, anchovies, capers and marinated olives.

Snacks and street food, called kolatsio, are another famous Greek food tradition. Perhaps the most popular Greek snack is the gyro, a pita sandwich made of seasoned meat, salad and tzatziki sauce, a blend of yogurt, cucumber and garlic. Spanakopita, a spinach and cheese pie, is another well-known example of kolatsio.

Greeks often end a meal with fresh fruit, but they do enjoy pastries as snacks. Many Greek sweets are doused in honey, a throwback to the ancient gods' love of ambrosia and nectar. Though mortals weren't allowed to eat those two items, honey served as a most welcome substitute [Source: Hoffman]. Honey-drenched doughnuts called loukoumades are just one of Greece's favorite sweets.