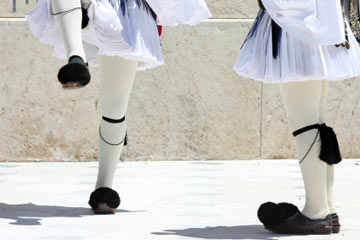 The uniform for the Evzones, the Greek presidential guard, includes a white pleated foustanella and pointed shoes called tsarouhia that are topped with pompons.
iStockphoto/ vladacanon

Ancient Greeks wore simple garments that draped over their bodies. The chiton and peplos were both simple outfits made from one-piece rectangles of fabric, with holes cut out for the head. The peplos was sleeveless, while the chiton covered part of the arms. Over this, people could wear a cloak called a himation. These outfits were usually made of wool, a fabric used frequently in Greek clothing, due to the prevalence of sheep farming in Greece and the country's surprisingly cool winters. Linen was also traditionally used for clothing worn during the hot Mediterranean summers.

While Greeks today mainly wear modern "global" style clothing, they still don traditional regional costumes for festivals and national holidays [Source: Riehecky]. These costumes' styles vary between the mainland and the islands, but many contain some elements of the ancient draped garments, and they all have some similar components in terms of materials and basic construction.

Once worn by fighters in the 1821 War of Independence, the traditional costume for men on mainland Greece features a kiltlike garment known as a foustanella. For example, the national costume -- today the uniform for the Evzones, the presidential guard -- includes a white foustanella that has 400 pleats, symbolizing the 400 years Greece was ruled by the Ottomans. That's paired with a wide-sleeved white shirt and topped off with an embroidered woolen vest. Long, white socks, a sash and pointed shoes called tsarouhia -- topped with their recognizable large pompons -- complete the outfit.

On the islands, the men's traditional costume starts with a white undergarment and is layered with baggy pants, known as vraka, a white shirt, a sleeveless coat, a sash, a jacket and a tasseled cap.

Traditional women's clothing in Greece also varies from region to region, but these outfits also contain similar elements. Most traditional costumes for women have a simple cotton dress as a base, with a sleeveless wool vest over it. To this, women may add aprons, sashes and, perhaps most importantly, large head scarves.

One example of a traditional outfit for women is the karagouna. This traditional wedding dress from Central Greece is very colorful and can be quite heavy. Like some other traditional Greek costumes, it includes many layers, starting with a black-fringed white underdress. Over that, women wear a few different coats, starting with an embroidered wool coat, followed by a long white sleeveless coat and then another embroidered waistcoat. This is all topped by a red apron. A woman wearing a karagouna will also don a head kerchief and chains of gold coins across her forehead and bosom to signify wealth.