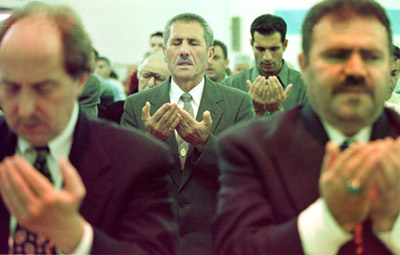 For Muslims, Ramadan is a month of blessing that includes prayer, fasting and charity.
Getty Images

Ramadan is the ninth month of the Islamic calendar. Because Islam uses a lunar calendar, Ramadan begins and ends at a different time each year. The way the lunar calendar works is that the beginning of each month begins with the sighting of the new moon. The lunar calendar is about 11 days shorter than the solar calendar used in much of the Western world. To learn more about the various calendars of the past and present, see Calendar Zone.

The start of Ramadan each year is based on a combination of sightings of the moon and astronomical calculations. In the United States, many Muslims adhere to the decision of the Islamic Society of North America on the start of the holiday. The end of Ramadan is determined in a similar way.

The Meaning of Ramadan

For Muslims, Ramadan is a month of blessing that includes prayer, fasting and charity. The meaning of Ramadan goes back many centuries, to about 610 A.D. It was at this time, during the ninth month of the lunar calendar, that Muslims believe God, or Allah, revealed the first verses of the Qu'ran, the holy book of Islam.

According to Islam, a caravan trader named Mohammed was walking in the desert near Mecca. This occurred in what is now Saudi Arabia. One night a voice called to him from the sky. It was the angel, Gabriel, who told Mohammed he had been chosen to receive the word of Allah. In the days after, Mohammed began speaking the verses that would be transcribed as the Qu'ran.

At many mosques, during Ramadan, verses from the Qu'ran are recited each night. The prayers are known as tarawih. By the end of Ramadan, the complete scripture has been recited. Ramadan is a time when Muslims can connect with the teachings of the Qu'ran.

The main component of Ramadan is the fast. In the next section, we'll find out how Muslims practice the fast of Ramadan and the significance of the fast to the Islamic faith.

To check the starting and ending dates of Ramadan for this year, see a calendar with beginning dates here, and one with Eid al-Fitr dates here.