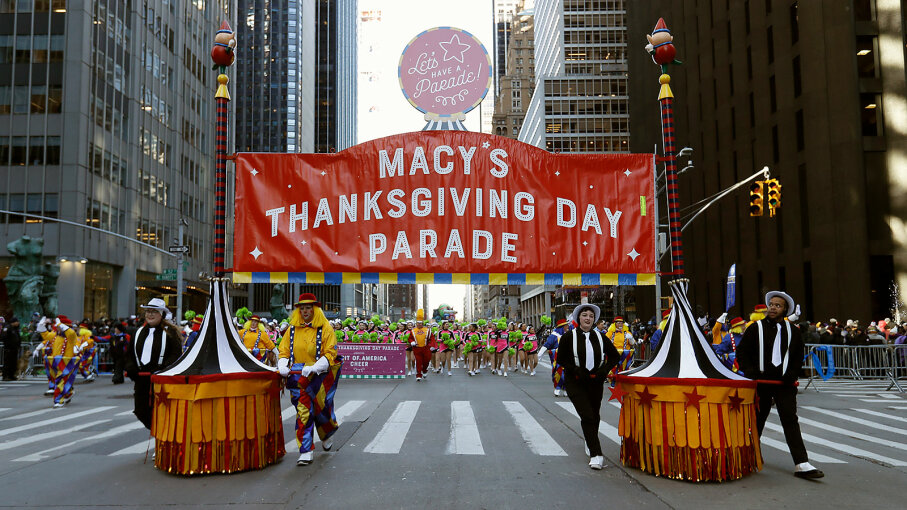 On the fourth Thursday of the month, the same day that most Americans gather around the dining table and gobble turkey to celebrate the Thanksgiving holiday, the Macy's Thanksgiving Day Parade marches through the streets of New York City. Elaborate floats, marching bands, clowns and celebrities create a carnivalesque atmosphere. But the main attraction is the parade's giant helium balloons, many of which are depictions of cartoon characters.

For more than 80 years, the parade has drawn spectators who line the streets and cheer on the participants. The parade currently starts its 43-block trek at 77th Street and Central Park West; travels south to Columbus Circle; turns onto Central Park South; veers onto 6th Avenue; and ends in front of Macy's Herald Square. Covering two and half miles, the three-hour spectacle runs from 9 a.m. to noon.

The holiday event grew (and grew) over time from a small parade of floats and live animals organized by Macy's employees -- the majority of whom were immigrants -- into a large-scale annual tradition. The parade showcases more than 8,000 participants, and crowds of more than 3.5 million spectators cram Manhattan's streets for a close-up view. Another 50 million watch the parade on TV [source: Macy's].

In this article, we'll look at the history behind the Macy's Thanksgiving Day Parade and how the parade's balloons and floats are created. We'll also look at some balloon-wrangling mishaps and learn about the logistics involved in staging a show for an audience of millions.

In the next section, we'll learn about the history behind the spectacle.­

Can You Volunteer for the Parade?

Apart from performing talent, all other parade participants such as balloon handlers, are Macy's employees, their families and friends.

History of the Macy's Parade 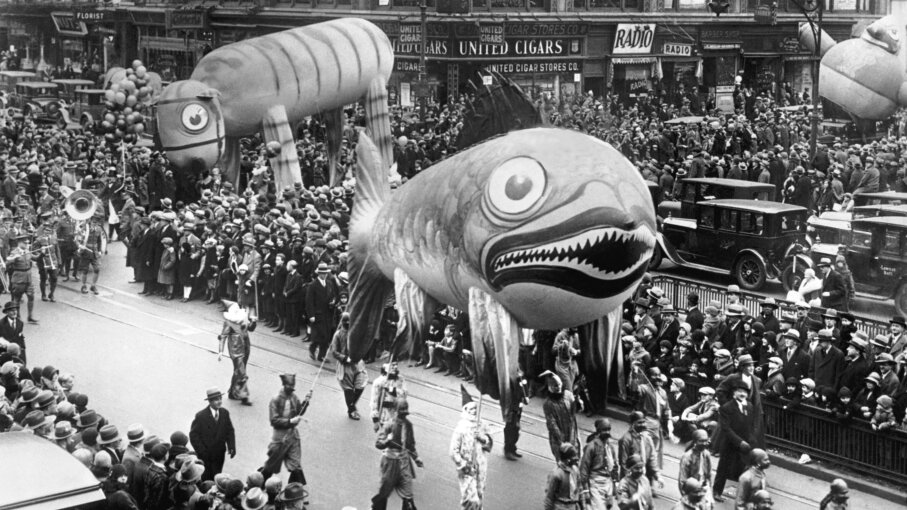 Macy's department store celebrated its 161st anniversary in 2019. The store staged its first Thanksgiving Day parade in 1924. That year it was called the Macy's Christmas Parade, and it followed a route from 145th Street and Convent Avenue to the Macy's store at 34th Street and Broadway. Three floats (pulled by horses), four bands and zoo animals from the Central Park Zoo -- camels, donkeys, elephants and goats -- starred in the parade. Santa Claus was last in the lineup, a tradition that continues to this day.

The parade took shape during the Roaring Twenties, a time of prosperity and pleasure. It was staged by Macy's employees, many of whom emigrated to America from Europe and longed to stage a celebration similar to the ones in their countries.

In 1927, the gigantic balloons that are now the signature element of the parade made their first appearance with the help of helium. The balloons replaced the zoo animals that were frightening to some children, and the first balloons included cartoon characters like Felix the Cat.

At the conclusion of the parade, the giant balloons were released into the air. In 1928, Macy's began offering a $100 reward for any returned balloons, which were affixed with return address labels [source: McCarthy]. In 1931, pilot Col. Clarence E. Chamberlain snagged a balloon with his airplane's wing, leading to a ban on retrieval by airplanes the following year. But after the 1932 parade, another pilot attempted to capture a balloon and nearly crashed, leading Macy's to discontinue releasing the balloons at the parade's end [source: McCarthy.

In 1934, celebrities became an important element of the parade, with singer-actor Eddie Cantor joining in the event that year. The Mickey Mouse helium balloon was also introduced to parade-goers.

From 1942 to 1944, the parade was canceled because of the shortage of helium and rubber during World War II. Those three years are the only time the celebration has been called off [source: Macy's]. When the parade returned in 1945, it was broadcast on television for the first time and was bigger than earlier versions.

Every year, the Macy's team behind the parade works to outdo the previous year's event. This evolution has meant bigger balloons, more floats, better materials and new technologies, all resulting in the flashy spectacle that rolls through the streets of New York today.

In the next section, we'll look at how the iconic balloons and elaborate floats are constructed. 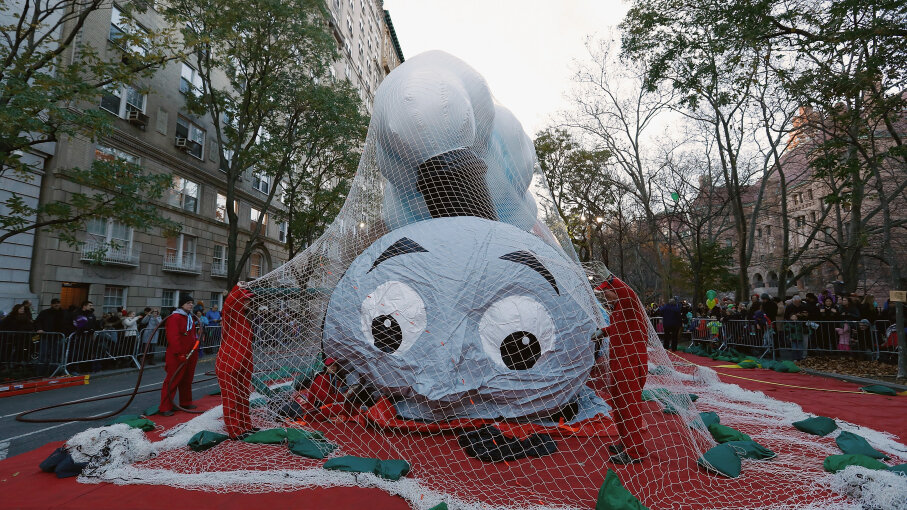 Workers inflate Thomas the train balloon before the start of the parade. John Lamparski/WireImage/Getty Images

Balloons were introduced in 1927, three years after the inaugural parade, and featured cartoon animal characters to replace the live zoo animals. Initially, the balloons were air-filled and carried by string. Later, a mixture of low-density helium and air was used. This enabled parade designers to create large-proportion balloons like a 50-foot hummingbird .

Today, in a former Tootsie Roll factory in Hoboken, N.J., just across the river from New York City, the balloons are created by the Macy's Parade Studio. Depending on what's being depicted, a figure may be fashioned vertically, horizontally or somewhere in between.

It all starts with a pencil sketch. Aerodynamic and engineering consultants assist with calculations to make sure the balloon will fly properly. An exact-scale replica made out of clay and a painted model (also an exact-scale replica) are fashioned before the actual balloon is cut out of fabric. Each balloon has several chambers and includes a zipper, an inflation device and a high-pressure valve. Flight, inflation and deflation tests are run, and cosmetic adjustments are made. Finally, the balloon can appear in the parade, up to one year after the process began.

Balloons are constructed of polyurethane, though they used to be made of rubber. Since the switch from air to helium, the behemoth balloons have coasted along with a big dose of help from volunteer balloon wranglers. But it hasn't always been that easy to keep the balloons afloat. In 1958, the balloons were filled with air and hoisted by cranes onto trucks due to a helium shortage. Poor weather conditions kept the balloons from being inflated at all in 1971 .

The balloons' dimensions vary, but most are about five to six stories high and somewhere around 60 feet long and 30 feet wide. Each balloon needs around 90 handlers. In all, there are around 2,000 to 3,000 balloon handlers [source: Macy's].

These handlers must weigh at least 120 pounds and be in good health. Of those, only a few hundred team leaders are required to attend training, though all are invited. Training includes lessons on aerodynamics, geometry and physics. Then, volunteers practice handling one of the big balloons on a field. The team leaders include an overall leader, pilot, captain and two drivers. A police officer marches with each balloon. The handlers dress in outfits that coordinate with their balloon and hold the ropes to guide the balloon. Each balloon is also tethered to two 800-pound utility vehicles.

In recent years, balloon accidents have made news, but there were other balloon bumps over the years. A Mighty Mouse balloon collapsed due to strong winds in 1956. Rain drenched the Kermit the Frog balloon in 1985, and he had to be carried. The Sonic the Hedgehog balloon injured an off-duty police captain in 1993. More recently, in 1997, a woman was in a coma for nearly a month after the Cat in the Hat balloon careened into a lamppost, raining debris on spectators. In 2005, an M & M balloon injured two sisters when it hit a street lamp and part of it crashed into them.

Of course, true "balloonatics" -- ardent fans of the parade -- aren't dissuaded by such rare occurrences. But as you'll find out later, the city of New York takes these accidents seriously and has put guidelines in place to make balloon wranglers and spectators more safe.

In the next section, we'll look at when floats arrived on the scene.

On the night before the parade, the public gathers near the entrance of 77th Street and Columbus Avenue to watch the mammoth parade balloons being inflated. For New Yorkers and tourists in the know, the event has become almost as popular as the parade itself. 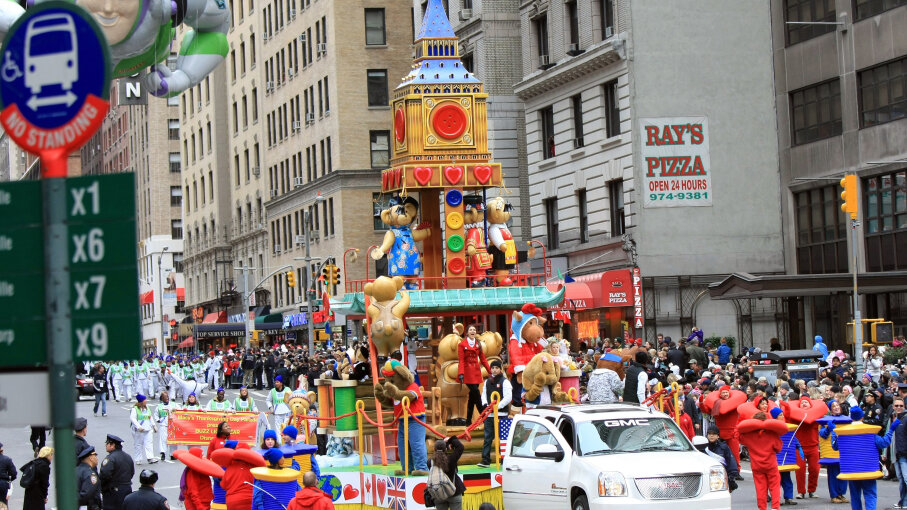 Floats have been a mainstay of the parade since its inception in 1924. The float didn't achieve its spectacle status until 1969, when Manfred Bass began creating the floats. Bass designed them so that they could be flattened for their trip through the Holland Tunnel. They were then reassembled during the pre-dawn hours of the parade.

Today, floats are constructed of materials including wood, metal, fiberglass, fabric and foam. The Macy's Parade Studio team starts with a sketch and then makes an exact-scale drawing of the float. The pieces of the float are built, starting with a flat base called a floatbed, and then painted. Props are added, and the float is fully assembled in the studio. As is the tradition, the last float of the parade carries Santa Claus, ushering in the start of the Christmas season.

In addition to balloons and floats, the lineup includes float-balloon combos called falloons and balloonicles -- a cross between a balloon and a self-powered vehicle. Eight hundred volunteers march as clowns, and about a dozen bands from around the country perform. Other special units, such as police officers on horseback, also appear in the parade.

In the next section, we'll learn about how the city of New York prepares for and manages one of the world's largest parades.­

Some famous and infamous parade incidents include: 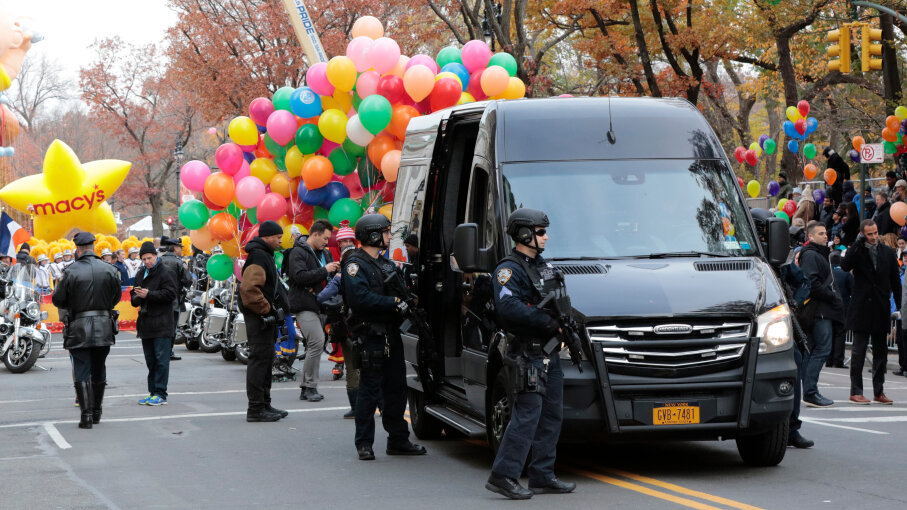 Though the New York Police Department doesn't release exact numbers on how many of its force patrol the parade, police presence is obvious. Safety precautions have been increased in recent decades. Then-Mayor Rudolph W. Giuliani appointed a 12-member task force to review the 1997 incident where a Cat in the Hat balloon crashed into a lamp post, injuring four people and leaving one in a coma. In 1998, guidelines were set that prohibit balloons from flying if sustained winds exceed 23 miles per hour or if gusts exceeded 34 miles per hour. Balloons must not be more than 70 feet tall, 40 feet wide or 78 feet long [source: NY Times].

In 2006, then-Mayor Michael Bloomberg appointed a five-member task force to review a 2005 balloon incident where an M&M balloon forced a street lamp top over, injuring two sisters [source: NY Times]. The task force found that balloons should be flown at lower heights to avoid obstructions. The guidelines for how high a balloon should be flown vary for each balloon.

In addition to these guidelines, anemometers -- instruments that measure the speed of wind -- are mounted on poles at key points on the route, and each one is monitored with a portable computer by a police officer and a New York City Office of Emergency Management representative.

Macy's begins planning for the parade at least one year in advance and includes float and balloon creation, celebrity booking, volunteer coordination, and training for clowns and balloon handlers. As the parade grows closer, the preparations get more intense.

Well before the parade begins, objects that could obstruct balloons -- including arms of lampposts, traffic-signal poles, streetlights and trees -- are either altered or removed. On the eve of the parade, the balloons and floats are brought to New York City, and set up begins. By 6 a.m. on Thanksgiving Day, the balloons and floats are ready to go, and parade participants take their places for the 9 a.m. parade start.

After the parade, floats are immediately disassembled, balloons deflated and all are returned to their warehouse in Hoboken, N.J. The Sanitation Department estimated it cost $30,000 to clean up after the 1990 parade [source: NY Times]. Mechanical street sweepers are used to clear the mess. In 2012, one website reported it took 75 sanitation workers and 15 sanitation officers to clean up 40 tons on parade debris.