Everything You Wanted to Know About the First Thanksgiving 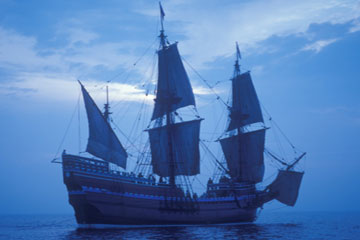 Mayflower Image Gallery Brush up on your Thanksgiving history, and you'll have something to talk about during dinner. See more pictures of the Mayflower.
VisionsofAmerica/Joe Sohn/Getty Images

You may think you learned everything there is to know about the first Thanksgiving back in grade school. It was a simple affair: The pilgrims wore buckles, the Native Americans brought corn and everyone made merry until the sun went down. But that's not the most accurate portrayal of the historical event.

In 1607, a group of British Protestants broke from the Church of England and set sail for Holland, where they remained for 12 years. When their money ran out, some English merchants offered them a financial incentive to sail across the Atlantic and put down roots in America. These separatists boarded the Mayflower, a cargo ship that had been used in the wine trade, for a 66-day journey. Violent storms nearly broke the ship's main mast, and the 102 passengers came ashore at Cape Cod, though they originally intended to settle closer to Virginia. Nearly half died from cold and disease in the harsh New England winter.

The settlers who survived made a comfortable home for themselves in Plymouth Colony in Massachusetts. According to Plymouth records, these people were called "first comers," and they were just the first wave of settlers who arrived on America's shores in the early 1620s. Scholars dissuade us from calling the settlers pilgrims because this blanket term lumps together the separatists and non-separatists, groups that had different motives for settling in America.

These first comers established a small but stable village in Plymouth and became friendly with the Wampanoag tribe. The Wampanoags had lived in the region for nearly 12,000 years before the Plymouth colonists arrived, and their first perceptions of the Europeans weren't favorable -- desperate settlers were filching supplies from the tribe's storehouses as they hunkered down for winter. The Wampanoag tribesman Squanto and an Abenaki named Samoset kindly showed them how to harvest corn and demonstrated how to fertilize their crops with fish. By March of 1621, the settlers and the Wampanoags formed an alliance and vowed to protect one another from encroaching tribes. Furthermore, the Wampanoags taught the Europeans how to live in accord with their new environment, alternately fishing, hunting and farming for sustenance as the seasons changed.

As spring and summer turned to autumn, the settlers rejoiced in the bounty of their harvest and planned a celebration. When the men set out to hunt wild game, however, the leader of the Wampanoags, Massasoit, mistakenly thought their gunfire signaled war. Massasoit took 90 men with him to call on the settlers and demand an explanation. It was a happy surprise to learn that they were hunting for a feast, and the Wampanoags joined in. For three days to a week (depending on the source) about 90 Wampanoags and 53 settlers feasted on such modern Thanksgiving staples as turkey, Indian corn, pumpkin and chestnuts. They also ate some local delicacies that many of us would find quite unusual, including eel, swan, seal, crane, eagle and samp (corn porridge).

Many people confuse this harvest celebration with the first Thanksgiving. We don't have as many details about that event because it was a pretty somber (and literal) occasion. It occurred in the fall of 1623, when the settlers offered prayers of thanks for the rain that relieved a severe two-month drought.

The reason we associate the first Thanksgiving with the 1621 harvest celebration is largely due to Sarah Josepha Hale. The editor of Godey's Lady's Book and author of the nursery rhyme "Mary Had a Little Lamb," Hale advocated for a national day of giving thanks in the mid-19th century. Her campaign operated under the misapprehension that the 17th-century day of thanksgiving and the first American fall harvest celebration occurred in tandem.