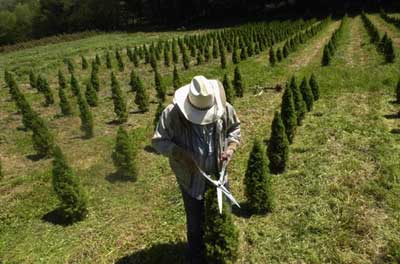 ­­Most people agree that the Christmas tree is a German tradition, started as early as A.D.700 In the 1800s, the tradition of a Christmas tree was widespread in Germany; it then spread to England and then to America through German immigrants, who settled primarily in Pennsylvania. Although you might think that all people in the 1800s went out to their back yard or to the closest patch of forest to chop down their holiday tree, Christmas trees have been sold commercially in the United States since the mid 1800s.

Today, about 30 to 35 million Christmas trees are produced each year. The majority of these trees, somewhere between 95 and 98 percent, come directly from Christmas tree farms or plantations. According to the University of Illinois Extension, more than 1 million acres of land have been planted with Christmas trees. In North America alone, there are more than 15,000 Christmas tree growers.

Although Christmas trees are grown in 49 states (Alaska is the only exception), the top seven states for Christmas tree production are:

Oregon is the leading producer, with more than 6 million sold in 2002; and Michigan offers the greatest number of varieties grown by any state, boasting 13 different types of Christmas trees.

Usually, about 2,000 trees are planted per acre in the United States, and more in the United Kingdom. On average, American growers plant trees 5 to 6 feet (1.5 to 1.8 meters) apart, while growers in the United Kingdom plant their trees between 3 and 4 feet (0.9 and 1.2 meters) apart. Out of 2,000 trees, anywhere from 750 to 1,500 can be expected to survive, depending on the climate and weather conditions they must endure. It can take from seven to 12 years of field growth for the average 6- or 7-foot tree to be ready to harvest.

During those years in the field, there are several things that must be done to ensure a hearty, attractive tree. Once seedlings are planted, growers have to consider proper fertilization, weed and pest control and a shearing schedule. Of these, the most important, especially to the consumer, is the shearing.

When it comes to Christmas trees, most people have a favorite shape. Some of us like tall, narrow trees. Others have an affinity for something more squat and plump. Both the shape of the tree and density of the needles depend on shearing. To control both the width and height of a tree, growers cut off, or shear, the tip of the leading shoot of the tree. They also cut the ends of the lateral branches, to encourage the conical shape.

Not only does this help achieve the desired taper, but it also eventually increases the number of branches and overall density of the tree's foliage.

In the next section, we'll look at the process of harvesting Christmas trees.