Where did the traditional anniversary gifts come from?

Browse the article Where did the traditional anniversary gifts come from? 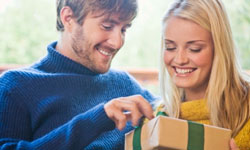 Traditional anniversary presents might not seem very hip, but you can give a surprising number of creative gifts using the materials on this dated list.
Jupiterimages/Goodshoot/Thinkstock

Did you forget to eat the top tier of your wedding cake on your first anniversary? Don't worry; you can still inject nuptial-related rituals back into your annual celebration by consulting the traditional anniversary gift list, which assigns gifts of a particular material to each year of wedded bliss.

Admittedly, some of the presents might seem a little strange at first, as it's doubtful most men will shriek with delight should they receive a gift of lace or china. But despite a few head-scratching selections, the list features a range of helpful, thoughtful and diverse gift ideas that can serve as a jumping-off point for shopping ventures. In fact, many men and women struggling to locate the perfect anniversary present have been delighted by this handy guide, which takes out much of the gifting guesswork. Of course, if you find that your creativity is stifled by such specificity, rest assured that you can choose to interpret the suggested material as loosely as you like.

Regardless if you feel this gift list is dated and archaic or classic and hip, you'll enjoy learning how it came into favor in the first place. Keep reading to learn how old the traditional anniversary gift list is (hint: It's older than you, your grandma and probably your great, great grandmother).

You might be wondering who came up with the idea of assigning each year of marriage with the gift of a particular material. If so, join the club! Plenty of theories abound, but they're difficult to verify with any certainty. The most likely guess is that the gift list made its debut during the Victorian era in the United Kingdom during the 1800s, and then jumped across the pond to the United States in the early 20th century [source: Martha Stewart]. Elaborate anniversary celebrations were fashionable back then, so gift-giving thrived as a result.

To this day, both regions have their own list, although they're almost identical in content. For example, cotton is the material of choice for revelers in the United Kingdom following the first year of marriage, whereas the American list saves this material for couples' second anniversary. The traditional list covers anniversary gift needs each year up until the 15th, after which it acknowledges only every fifth anniversary, up to the 60thcelebration.

In 1937, a jeweler's association realized that the list was neglecting major sales opportunities by slighting so many perfectly good anniversary years (people celebrating their 16th anniversary still need presents, right?). To remedy the problem, they established a modern list of annual gifts for 75 years' worth of marriage [source: Martha Stewart]. Some of the old-fashioned gifts were replaced with more practical items, like silverware, desk sets and clocks. Although these new gifts were assumedly created with the best intentions, we can't imagine there are many modern brides who will be thrilled with the gift of a desk set -- unless it also happens to be diamond-encrusted or made of chocolate. The traditional list allows more room for interpretation (it's pretty difficult to re-interpret the aforementioned desk set), so that could be one of the reasons why the modern version is less well-known than the classic list.

Because gold has become prohibitively expensive in recent years, many couples are forgoing this pricy traditional metal and are opting for titanium, cobalt and even steel wedding bands instead [source: Christian Science Monitor].

Traditional Gifts in the Modern Era 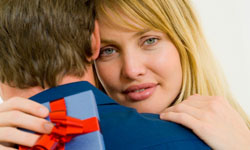 We hope that there's a pair of plane tickets in that box and not a collection of sticky-notes.
Pixland/Thinkstock

Fortunately for fans of the traditional gift list, most of the suggested materials have withstood the test of time. We don't know a woman who will turn up her nose to fine china, jewelry or anything that incorporates platinum. However, the modern list suggests the gift of diamonds for multiple anniversary years, which is certainly not something we (or most wives) are going to disagree with.

Both the modern and traditional lists continue to be referenced today by gift-purchasers, although it's not required for a bride or groom to adhere to them. In fact, plenty of people don't even know these guidelines exist and choose instead to fall back on gift cards, Champagne or a fancy evening out on the town.

If, however, you decide to honor this Victorian tradition, it's easy to put a modern spin on these antiquated gift ideas. For example, "paper" is the designated material for the first anniversary. Rather than purchase your beloved a ream of printer paper, consider presenting her with a pair of plane tickets for a second honeymoon. If your budget limits such extravagance, get creative and give her tickets to the ballet or musical theater, or create a coupon book good for massages, date nights and housework. On the flip side, a wife might score great seats to a sporting event and spend the day helping her husband cheer his favorite team on.

Whether you decide to use these gift guidelines or not, be sure to kick back and enjoy some alone time with your beloved. Sure, material objects are nice, but your companionship is the best gift you could give to your spouse!

Check out the next page for a full list of the traditional anniversary gifts.

If the idea of a tailor-made anniversary gift list appeals to you, look no further for specifics! Below you'll find the complete traditional list.

Now that the list is laid out in front of you, it probably seems pretty obvious that good things come to those who wait. If, however, you feel especially inclined to give the gift of diamonds or sapphires earlier than scheduled, go right ahead. We promise your spouse won't mind!

There's a list of anniversary flowers, too! It begins with carnations for the first anniversary and winds through varieties like daisies and dahlias before ending with yellow roses and violets for the 50th celebration.