History of the Tea Ceremony 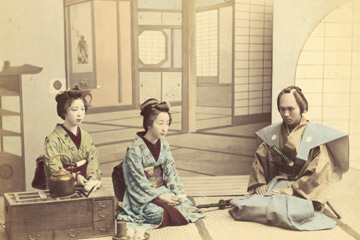 Geisha receive a samurai for tea, circa 1880
Hulton Archive/Getty Images

Tea came to Japan from China in the ninth century. Though the Chinese had long valued tea for medicinal purposes, Buddhist monks in the country realized that consuming the beverage helped them stay alert during long stretches of meditation. They passed this tip along to Japanese monks who visited, and as tea became standard in Japanese monasteries, it also became popular with elite members of Japanese society, such as emperors, aristocrats and warriors. From the ninth to the 15th century, two different types of tea ceremonies emerged -- a simple one performed by the monks and an elaborate one enjoyed by the nobility. The latter ceremony could last for days, as aristocrats and rulers presented dozens, even hundreds, of cups of tea for their guests to taste while they enjoyed dance performances, lavish banquets and athletic competitions.

In the 15th and 16th centuries, three men shaped the style of the tea ceremony as we know it today. The first was Murata Shuko (1423-1502), who was appalled by the ostentatious nature of the ceremonies hosted by the elite. He had studied Zen Buddhism and wanted the tea ceremony to be simpler and more aligned with Zen beliefs. Zen Buddhists hold that everyday activities can lead to enlightenment, and Shuko believed that by serving tea in a deliberate, studied manner, people could better appreciate the world around them.

Shuko's mission was carried on by Takena Joo (1502-1555), who reclaimed the tea ceremony from the upper classes by establishing tearooms that were simple and unadorned, so that guests could focus more fully on the task of tea. Joo's disciple, Sen no Rikyu (1522-1591), was probably the most influential of the three men. Rikyu believed that tea ceremonies must demonstrate the aesthetic of wabi, which refers to a kind of spiritual poverty, because by emptying themselves, people could find fulfillment with something greater. Rather than indulging in extravagance, tea ceremony participants should seek simplicity. They should strive for awareness of the natural world and find beauty in imperfections.

Additionally, Rikyu claimed there were four principles of tea: harmony, respect, purity and tranquility. Every movement within a tearoom on the part of the host and the guests is in service of living these principles -- the host should pick utensils that are harmonious with a given theme, and guests must show respect by handling the utensils with care. Purity is achieved by leaving the secular world behind and focusing on this special ceremony -- tranquility is considered attainable after the first three principles are met.

When Rikyu died, his three great-grandsons founded three different schools of tea. The tea ceremony has evolved slightly under the tea masters from these schools, but traditionalists continue to practice serving tea as Rikyu did. Rikyu also had immense impact on tea ceremony sets and utensils, which we'll discuss on the next page.