by Melanie Radzicki McManus
Prev NEXT
10 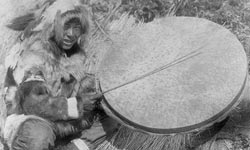 In this photograph circa 1929, this Eskimo man is holding a drum made of walrus skin or bladder.
Edward S. Curtis Collection/Library of Congress

Drums are the oldest instrument on earth, and the one most important to Native Americans. Used in both sacred and secular music, numerous oral traditions refer to drumbeats as the earth's heartbeat, or the spirit of life. Drumbeats drive all Native American music, so it's considered essential that everyone listening hears the drum's sound. Further, it's also critical that drums accompany the human voice. In fact, the two are so tightly linked in American Indian culture, those who play the drums aren't called drummers, but rather singers [sources: Big East Native, Met Museum, Native Languages].

While the various American Indian tribes construct and use drums differently, most create them in a similar fashion, stretching finely tanned buckskin or elk skin across a wooden frame or hollowed log. Such a construction process combines animal and plant life, plus air, water and fire -- all of the earth's elements --resulting in an instrument that represents the circle of life [source: Big East Native].

American Indian drums tend to be large -- two or three feet wide -- and are normally played communally by groups of men standing in a circle. Smaller, single-sided drums are also used by Native Americans, as are water drums, which are created by stretching a moist, tanned hide over a small, wooden vessel or gourd filled with water. These smaller drums are sometimes called tom-toms by non-Native Americans; tom-tom is actually an old British term for a child's toy drum, not an American Indian term [source: Native Languages].