The Origins of Body Painting 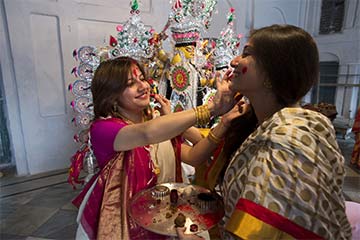 Married women smear vermilion on each other's faces as a part of farewell rituals on the last day of the Hindu Durga puja festival in India.
Subhendu Sarkar/LightRocket via Getty Images

When you think of body painting, images of fancifully painted Vegas acrobats, Hollywood starlets or promotional characters may come to mind – the body-painted people we know today. Yet body-painting's origins stretch back nearly to the beginning of mankind. Some researchers say body painting was actually the first form of art. Indeed, historical records show that ancient people from Africa, Asia, Europe and Australia all decorated themselves with colorful "paint." Back then, natural pigments from plants and fruits were used to make paints, typically in red, blue, yellow and white [sources: Face-Painting-Fun,History of Cosmetics].

People decorated themselves with paint for innumerable reasons, especially social and spiritual ones. Weddings, funerals and other rites of passage, such as puberty, were occasions for painting faces or body parts. So was war: Body painting could be part of camouflage or to make the warriors look fiercer. Tattoos, piercings and even scarring served these same purposes. Many religious ceremonies also featured body painting [sources: Bella Volen, History of Cosmetics].

In Western societies, body painting didn't go mainstream until more modern times. Until the mid-20th century, it was mainly used by actors, circus performers or other entertainers. In 1933, makeup pioneer Max Factor shocked attendees at the Chicago World's Fair with a nude model fully covered in body paint. During the turbulent 1960s, artists and hippies were trying to shake up the world, and painting face and body parts in psychedelic patterns was one means of self-expression [source: History of Cosmetics].

Still, the art didn't really catch on with the general public until the infamous Vanity Fair magazine cover of August 1992, which featured actress Demi Moore in a striking outfit created entirely from body paint [source: History of Cosmetics]. By then the public was more tolerant of artistic license, and while the cover caused a stir, it was a positive one. Today body painting is a widely accepted art form, complete with worldwide competitions and Austria's famous World Bodypainting Festival, an annual event attracting tens of thousands.