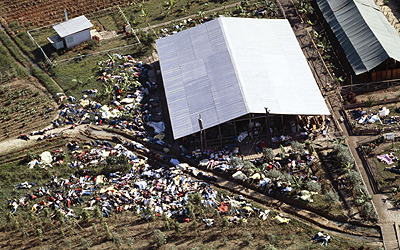 Learn what a cult really is and separate the truth from the propaganda.
David Hume Kennerly/­Getty Images

­While most small, non-mainstream religions are harmless, certain circumstances do make them an easy breeding ground for destructive practices. The People's Temple began as a charitable organization in the United States that ran a free medical clinic and drug rehabilitation program. But you probably know it as the doomsday cult whose Kool-Aid mass suicide/murders took more than 900 lives in Jonestown, Guyana, in 1978. How can something that began with so much hope go so very wrong? There's a lot of speculation about what happened to the members of The People's Temple, but for the most part, what went wrong is what goes wrong with most destructive cults: the leadership. ­ ­

It's really a two-part problem. First, many of these religions are founded by a single person who retains a position of exclusive power within the organization, and power tends to corrupt even the most ethical among us. In the case of The People's Temple, there is evidence that its leader, Reverend James Warren Jones, was abusing prescription drugs and becoming increasingly paranoid through the 1970s. Next, because these groups operate outside the mainstream, there is usually no one checking up on their operating procedures, so a corrupt or mentally unstable leader is free to exploit his followers to his heart's content. In addition to this authoritarian leadership structure, some primary characteristics of a destructive cult include:

For the remainder of this article, when we refer to techniques employed by "cults," we're talking about destructive cults, not the small religious groups that keep to themselves and don't hurt anybody. In the following sections, we'll examine destructive cults more closely and find out how they function. Let's start with the leadership structure.

It Takes All Kinds

Not all destructive cults are religious in nature. They can be driven by political or financial goals as well. In the end, it's all about subjugating members' individuality to achieve the desires of the leader(s), whether that means reinforcing a self-proclaimed messianic status, participating in destructive activities in the name of political revolution or simply filling the leader's pockets with their hard-earned money. There are radical political groups, commercial pyramid schemes and self-help seminars that employ similar recruiting and indoctrinating techniques as destructive religious cults, targeting people with certain vulnerabilities and then playing on those vulnerabilities to keep them "in the fold." The end result is a "convert" who will blow himself up in the name of destroying capitalism, try to get all of his loved ones to buy into the same business deal that he is losing his life savings on, or keep signing up for an unending series of lectures, seminars and retreats that promise psychological and spiritual healing but really only drain his bank account.