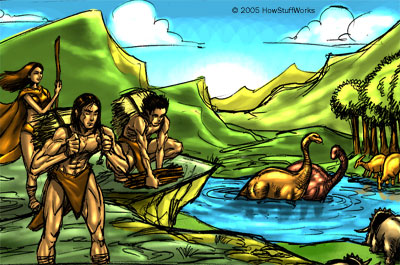 Many young-Earth creationists believe that humans and dinosaurs inhabited the Earth at the same time.

The primary supporters of the creation-science movement that strives to define creationism as a scientific theory, young-Earth creationists (YECs) believe that the Earth is a sphere and that it rotates around the sun, but they reject modern biology in favor of a literal reading of the Genesis creation account.

Young-Earth creationists believe that God directly and miraculously created the universe, the Earth and all life on Earth in the course of six 24-hour days. They calculate the age of the Earth to be in the area of 6,000 to 10,000 years old as opposed to the 4.5 billion years calculated using radiometric dating and other scientific dating methods -- thus the "young-Earth" designation. This calculation comes from information in Genesis, which includes data on the lifespans of Biblical patriarchs from Adam to Abraham, including how old they were when each of them had a son. If you add up those ages and then add six days for the period of creation (God created Adam on the sixth day), you end up with approximately 6,000 to 10,000 years.

YECs reject the theory of evolution in its entirety. They also reject a great deal of scientific understanding in areas of geology, genomics and astronomy. For instance, young-Earth creationists do not believe that geological strata were formed over billions of years; instead, they believe that almost all geological formations are the result of a single, worldwide flood in which all life on Earth was wiped out with the exception of Noah and his family and the animals he saved on his ark.

Many people raise the topic of dinosaurs when it comes to YEC: What about evidence of dinosaurs in the fossil record? Evidence shows that humans and dinosaurs lived millions of years apart. Wouldn't that mean that Earth must be more than 6,000 years old?

The 19th-century writer Philip Henry Goss tried to reconcile scientific evidence of an ancient Earth with Biblical evidence of a young Earth using the following hypothesis: God created the Earth with the appearance of age, much in the way that God created Adam with a navel (omphalos is Greek for navel) even though Adam was not the product of gestation. God "made up" a long history for the Earth and included false evidence of that history when he formed the Earth out of nothing. Most scientists rejected Goss's argument on the grounds that it can not be disproved or proved and therefore is not a scientific theory. Most creationists rejected it because it would mean that God lied.