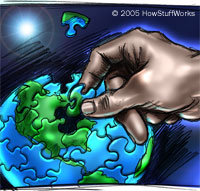 Not so long ago, there were two major competing theories in the United States regarding the origins of life: evolution and creationism. Evolution represented science's opinion of how the universe began, and creationism offered the religious explanation. It was pretty cut and dry. Then came "intelligent design."

­The intelligent design (ID) movement claims that life as we know it could not have developed through random natural processes -- that only the guidance of an intelligent power can explain the complexity and diversity that we see today.

In 2004, the school board of Dover, Pennsylvania, voted to require the teaching of intelligent design alongside evolution in science classrooms. On December 20, 2005, U.S. District Court Judge John Jones ruled that the school district cannot follow through with its plan because it would violate the Constitutional separation of church and state. In his opinion Judge Jones wrote, "We have concluded that it is not [science], and moreover that ID cannot uncouple itself from its creationist, and thus religious, antecedents." You can read Judge Jones' entire opinion here.