Me? Wear a Corset? 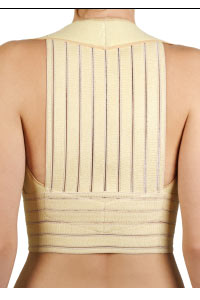 This medical corset is worn to correct posture.
© iStockphoto.com/shoo_arts

There are four basic reasons you might want to wear a corset: historical re-enacting, fashion, health or fetish. Some corsets come with real health risks that should never be taken lightly.

Glenard's Disease, which can be caused by long-term tight-lacing, is marked by muscle atrophy and a shifting of the organs away from their natural positions [source: Orchard]. Lacing the corset too tightly can also create other physical deformities. These problems can be avoided by limiting the time you spend in a corset, and by not tightening up the laces to the point of discomfort. Extreme corsetry, like most extreme things, can cost you much more than you gain.

A huge role in the resurgence of the corset is played by period plays and movies. Conscientious costume designers have a wealth of material to draw on to design exacting corsets that set the atmosphere, knowing that a discerning audience will notice the slightest inaccuracy. Historical re-enactment continues to grow in popularity, and many groups require that your clothing for such events pass certain accuracy standards -- right down to the undies.

If you plan on wearing a fashion corset for special occasions, a well-built, custom-made garment makes a major statement and will definitely get you noticed. You might feel or look slimmer, but don't be surprised if you find yourself unable to move quite as freely as you normally would. Don't think you can buy a corset on the day of a big event. A properly fitted corset takes time to create, and it may also take some time to break in.

Medically speaking, scoliosis and other posture problems can be treated with medical corsets. As we mentioned before, Andy Warhol had to wear one to help his back support his weight. This isn't totally dissimilar to the weight belts that support athletes' backs.

Often made of leather, fetish corsets usually link the concept of bondage with their reputation for pain. There are also many fashion corsets which borrow the shiny patent leather and hardware-laden look of fetish corsets.

The silhouettes favored by fashion and society come and go, but corsets have managed to endure as garments in one form or another. Whether you choose to wear a corset or other body shaper is entirely up to you, but remember: A healthy attitude and healthy body are always in fashion.