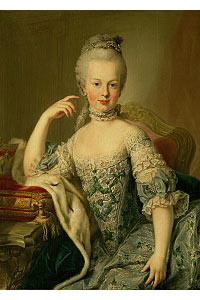 The silhouette that was popular in Marie Antoinette's time was a funnel shape, rather than the hourglass that became vogue in the Victorian era.
Hulton Archive/Imagno/Getty Images

Is your family history full of colorful characters? Maybe because of their very nature, corsets have a family history every bit as colorful. Like cousins, distant relatives don't look much alike, and the earliest ancestor of the corset could be the first rope a woman tied around her waist to accentuate her waistline. Cretan women may have been the first to wear something actually resembling a corset (in that it was a body-shaping garment), covering just the waist and hips, more than 3,000 years ago [source: Thomas].

In the Middle Ages (more than a few years before Madonna wore fashion corsets), it became fashionable for women in the royal courts to wear what they called decorated heavy stays as outerwear, covering the bust and shaping the waist. But in general, corsets continued to be undergarments designed to shape the female form. The 18th century saw these heavy stays gradually replaced with the supposedly lighter corset. Apart from small changes in accessories, corsets didn't really evolve again until the 19th century when the hourglass figure became the epitome of fashion.

Less restrictive health corsets, made by brothers Ira DeVer and Lucien Warner, began to take off in popularity in the United States beginning around 1874. Around this same time, over-hunting of the baleen whale made the traditional whalebone increasingly expensive, and rustproof steel was introduced in 1894 [source: Time].

Charles Dana Gibson, a Victorian artist, earned eternal fame (or infamy) in the 1890s for popularizing the S-shaped Gibson Girl with his stylized paintings of society women. This shape altered the hourglass silhouette by pushing the rear back and the bust forward -- a very unnatural position for the spine. (We'll talk more about this iconic but short-lived fad a little later.)

Unwilling to give up their newfound freedom of movement, and sparked by huge societal changes stemming from two world wars and the Great Depression, most women abandoned restrictive corsets entirely. Bras, girdles and (eventually) elastic bodysuits filled the supporting roles that corsets once did.

For the most part, corsets throughout history were everyday normal garments that, in spite of reputation, did not negatively affect the wearer. They were no more exotic or bizarre than a bra is today. But what about people who take corsetry to the limit?