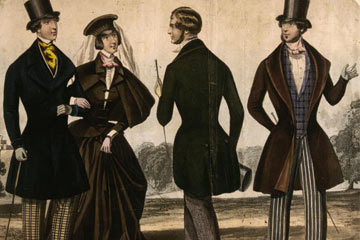 Gents are no exception. The fashion ideal for a man's silhouette in the Victorian era required the masculine gender to get a little shaping from corsets.
Hulton Archive/Stringer/Getty Images

The corset's long history has spawned a slew of myths and urban legends. A few of the most persistent illustrate the colorful life of these garments.

Remember movies showing the stereotypical Victorian waif, fainting at the slightest shock (like an ankle showing)? People often assume it's due to lack of oxygen resulting from her corset-restricted breathing. Unless you, or a well-meaning semi-sadistic assistant, tighten the corset laces beyond reason, you should still have enough room for breathing. Not only that, corsets historically helped support heavy outer garments, so they were used more for support and for making the wearer's waist tiny. The more likely reason for what little fainting occurred resulted from a combination of the shallow breathing and mediocre nutrition -- and maybe a little dramatic effect for show. Who wouldn't want to get some use out of that brand new fainting couch and provide a promising suitor an opportunity to rescue his damsel in distress?

Another myth that still gets tossed around is that people in the Victorian era removed ribs or intentionally broke them to fit into a corset. Looking at how narrow some corseted waists become, it's not hard to see where this whopper came from. But don't forget, Victorian medicine is infamous for allowing more people to die in wars from medical issues than from the battle itself. Rib-removal surgery in the 19th century would have come with a high risk of an untimely death. Sometimes myths start with a grain of truth. That truth here is that because women wore corsets from a very young age, it wasn't uncommon for their lower rib cage to become bent in permanently.

Not a myth: Perhaps it'll come as no surprise that women are not the only ones to wear corsets. We're not talking about fetish-wear here, either. After all, guys have vanity too. Companies in the late 19th century offered men's corsets to the discerning gentleman for everyday wear. Similar garments are marketed more discreetly today, though they're softer and we call them vests. Men have also worn corsets for many hundreds of years for medical purposes; Andy Warhol required one to support his weakened back from the time he was shot in 1968 until his death.

Corsets are way too complicated to suddenly appear out of nowhere, so where did they come from?