The History of Code Switching 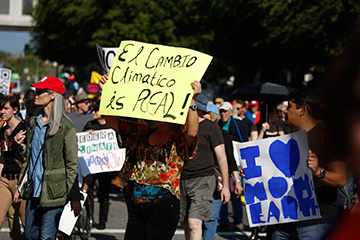 A sign written in Spanglish declares that climate change is real at the 'Forward on Climate' rally held on Feb. 17, 2013 in Los Angeles.
David McNew/Getty Images

Code switching has likely gone on for centuries — probably ever since the first group of people who spoke one language moved into an area inhabited by people who spoke another tongue [source: Fought]. But while it's gone on forever, it wasn't studied or discussed much in the U.S. until relatively recently. The impetus appears to have been the emergence into the spotlight of African American Vernacular English (AAVE), also called Ebonics.

In 1977, some parents of students attending Martin Luther King Elementary School in Ann Arbor, Michigan, sued the school district board in U.S. district court because, they said, their kids weren't being taught standard English [source: Coffey]. Their kids were being raised at home speaking AAVE, the parents noted, and if they didn't learn to read and write standard English, their kids would end up functionally illiterate.

The parents weren't asking that their children be taught in AAVE, or that AAVE be taught in schools, as some people mistakenly characterized the suit. It was simply a request that their children be given assistance in learning to read standard English. The district court subsequently ruled in 1979 that the Ann Arbor School District Board must help all kids overcome language barriers that make it impossible for them to participate equally in school [source: The University of Michigan Library]. This case helped establish AAVE as a legitimate language and drew sociolinguists' attention to AAVE and other related linguistic issues, such as code switching.

Attention to code switching was further boosted by the resurgence of Spanglish, the commingling of the Spanish and English languages. While Spanglish has been spoken in pockets of America for centuries, since Spanish-speakers arrived to the continent well before the pilgrims, the more recent influx of Mexican immigrants that began in the 1990s caused Spanglish to become more widespread [source: Rothman and Rell]. And, with 54 million Hispanics in the U.S. as of 2013 — 17 percent of the population — it's here to stay [source: United States Census Bureau]. So the study of code switching will likely continue to expand and evolve, just like code switching itself.