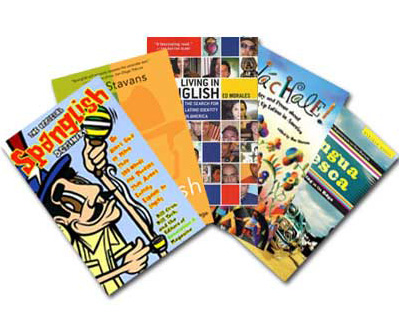 Several books discuss the origins and development of Spanglish. Some include Spanglish lexicons.
Images courtesy Amazon

When I was in middle school, two friends and I studied French while most of our classmates studied Spanish. During our other classes, the three of us sometimes passed notes in French. Speaking and writing in French set us apart from our peers -- it defined our group and made us unique.

Since we were beginning students, we didn't always know which words to use to express ourselves. So, we didn't write entirely in French. We substituted English words for French words we didn't know, and we invented words that we thought could convey our meaning. Sometimes, we wrote sentences that started in French but ended in English, or vice versa.

We didn't take our note passing too seriously, but this type of wordplay -- which linguists call code switching or code mixing -- is a common part of learning a new language. In the United States, where more than 17 million people speak Spanish at home, such linguistic mixing has taken on a life of its own. A hybrid of English and Spanish known as Spanglish can be heard in many predominantly Hispanic areas as well as on TV and in movies.

To learn more about where Spanglish came from and how it works, we interviewed Dr. Ilan Stavans, a professor at Amherst College. Stavans has taught college courses on Spanglish and has written a book detailing its origins, its use and some of its vocabulary. He has also translated the first part of the Spanish classic "Don Quixote de la Mancha" into Spanglish.

In linguistic terms, a code is a whole language or a component of a language, like a word or syllable. Code switching occurs when a speaker switches from one language to another. Code mixing takes place when a speaker uses small components of one language while primarily speaking another.