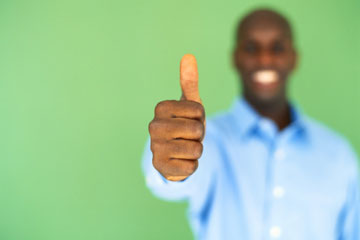 A smile. A thumbs up signal. Is this guy telling you everything's A-OK?
Stockbyte/Thinkstock

"You can't hide your lyin' eyes," the Eagles cautioned in their mid-1970s Top 40 hit. And they were right. We like to think that words are what matters. But in communicating with other people, what we do is at least as important as -- and perhaps more important than -- what we actually say. Body language is a powerful form of nonverbal communication that consists of hand and arm gestures, body position and movements, and facial expressions and eye movements. It clues others in to what we're thinking, often without their even realizing it [source: Mehrabian].

Psychological researchers first began studying body language intently in the 1940s, and since then, they've learned just how influential it is. University of California, Los Angeles (UCLA) psychology professor Albert Mehrabian, one of the leading researchers of the phenomenon, has found that within the initial four minutes of meeting someone for the first time, our facial expressions account for 55 percent of the impression we make. In comparison, only seven percent of that impression comes from our actual words, with the remainder of the information coming from tone of voice [source: Mehrabian].

We do most of this communicating inadvertently, and similarly, other people often interpret our nonverbal information without even being aware that they're doing it. "Many of us have no idea that our non-verbal cues are making an impact," West Palm Beach, Fla., public relations consultant Carey O'Donnell recently told Forbes.com in an interview. "There are thousands of these micro-expressions, and people are reading these, even if they are only subconsciously translating these cues" [source: Laneri].

In this article, we'll look at how our body language conveys information, whether it accurately conveys a person's thoughts, and how we may interpret, or misinterpret, it. We'll also discuss the pros and cons of trying to control and even consciously manipulate these nonverbal cues, in order to communicate more powerfully and effectively with others.

But first, let's take a look at where body language comes from and how we developed it.

How and Why We Speak With our Bodies

If you've watched a dog wag its tail, then you know that animals have the ability to communicate with their bodies. Given that our earliest ancestors may date back millions of years, and complex verbal human language probably didn't exist until 100,000 years ago, it's a good bet that humans relied upon interpreting one another's body movements, posture and facial expressions long before they had words to express what they were sensing [source: Johansson]. In prehistoric times, the ability to interpret another hunter-gatherer's attitude and intentions from a distance, before the person got within striking range, may have meant the difference between life and death [source: Goman].

That urgency may explain why humans became adept at forming impressions and making snap judgments based on what Tufts University psychology professor Nalini Ambady calls "thin slices" of experience, formed in first few seconds of an encounter. Those thin slices, she believes, are generated in the most primitive area of the brain, the same region where emotional feelings are processed. That may explain why we develop such powerful feelings about someone we have just met, whether that person is a prospective mate or someone trying to sell us a used car [source: Flora].

Researchers say body language is a mix of innate, learned and hybrid movements, postures and expressions. Children are born with the ability to blink and blush, for example, while winking and saluting with a raised hand are learned gestures. Laughing, crying and shrugging are hybrid body language because, while they involve innate movements, we are taught how to connect them to certain situations [source: Grayson].

Just as there are thousands of spoken/written languages throughout the world, the meaning of body language can vary from place to place. In the United States, for example, a smile indicates happiness, while in Asia, it may indicate agreement. And while Americans see eye contact as a gesture of attentiveness or self-assurance, in some Asian and African countries, it's perceived as disrespectful. In Italy, it's common to emphasize one's words by waving the arms, but Japanese speakers avoid doing that because in their country it's been deemed impolite [source: Rugsaken].

Can You Decipher Hidden Messages From Body Language? 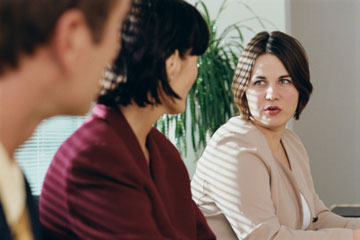 Does the woman on the right's body language imply she's on board with her colleague's ideas or that she's uncomfortable with them?
Polka Dot Images/Thinkstock

Because it lacks the grammar of a spoken/written language, body language is less formal and precise, communication researchers say. But body language does have some structure. Researchers have identified five basic types of nonverbal communication. They include emblems, which are nonverbal acts, such as shaking a fist, that can easily be translated into words, and illustrators, which emphasize speech, such as shaking one's head. Regulators indicate that the other person should start speaking with a gesture such as a head nod -- or, in the case of pacing and fidgeting, hint to them that it's time to wind things up. Adaptors are movements that primarily make a person more comfortable, such as shifting positions while listening. Affect display, the general category that includes movements and postures conveying emotions or thoughts, especially unspoken ones, is the type of nonverbal behavior that probably is the most important to us [source: Mehrabian].

Can body language be read like a book? Some experts in psychology, law enforcement and intelligence agencies believe that it can, particularly by analyzing the brief, subtle variations in a person's facial expressions, which are known as microexpressions. By systematically going through all the possible configurations of the human facial muscles, researchers Paul Ekman and Wallace Friesen have been able to identify about 3,000 different configurations, some of which are involuntary, that have apparent nonverbal meaning. They created the Facial Action Coding System (FACS), a tool for gleaning meaning from expressions [source: Gladwell]. Today, FBI agents and other investigators often receive training in microexpression analysis and use it when they question suspects [source: NPR].

Experts caution that it's also easy to misinterpret body language, by taking it out of context what is normal for that particular person. Author and consultant Carol Kinsey Goman, for example, recalls giving a presentation in New York to the chief executive of a financial services company. The head honcho sat at the table with his arms tightly crossed, without smiling or nodding encouragement, and at the end, simply said "thank you" without making eye contact and left the room. Given all those seemingly negative cues, Goman was startled when the man's secretary told her that he'd been favorably impressed by her. If the CEO hadn't liked what he'd heard, the secretary explained to Goman, "he would have gotten up right in the middle of your presentation and walked out" [source: Goman].

Controlling and Manipulating Your Own Body Language

Experts say that by becoming aware of your body language, you can train yourself to control it, and even consciously harness it to make your communication more effective.

West Palm Beach, Fla.-based public relations consultant Cary O'Donnell recommends making videos of your verbal presentations, and then watching the recording with the sound off. Another expert, communication and litigation consultant Theresa Zagnoli, recommends using breathing and relaxation techniques before a meeting to calm yourself, so that you're more aware of your movements and gestures [source: Laneri].

Zagnoli also suggests deliberately altering your body language to better connect with another person. The technique, called mirroring, involves studying the facial expressions, posture, tone of voice and other microexpressions transmitted by the person to whom you're talking, and then subtly mimicking them. While that might seem manipulative or phony to some, Zagnoli believes that affecting that sort of synchronicity actually enables you to communicate your true thoughts and feelings more accurately, and to avoid misinterpretation [source: Laneri].

But be careful. Shaping your body language can backfire if it's not done skillfully, warns consultant and author Janine Driver, who spent a decade training federal agents on how to interpret suspects' body language during interrogations. One potentially dangerous mistake is to focus on a certain detail, without thinking of how it fits into your overall impression.

Early in my career as a journalist, I interviewed a veteran policy detective, who claimed that he could detect when a suspect was lying by whether the person's carotid artery began to subtly, but visibly, throb in his or her neck. I don't know how accurate that particular investigative trick really is, but I have learned over the years that people tend to tell a story with their faces, hands and other body parts that may or may not match the story their words convey. In researching this article, I was particularly fascinated to learn that interpreting body language is a skill that ancient humans possessed, probably long before spoken language even existed. It was also interesting to look at the art of manipulating body language to deliberately convey an impression. We see politicians, actors and public figures make use of those techniques continually, and it's insightful to be able to discern between genuine signs of emotion and gestures that appear to be spontaneous, but aren't.

Stuff you need to know:

Now, test your knowledge with these quizzes!

Check out these image galleries!