by the Editors of Publications International, Ltd. & Laurie L. Dove
Prev NEXT
9

The Curse of Tutankhamen's Tomb 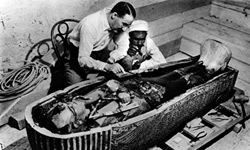 In 1922, English explorer Howard Carter was leading an expedition funded by George Herbert, the Fifth Earl of Carnarvon, when Carter discovered the tomb of ancient Egyptian king Tutankhamen and all the riches it held. After opening the tomb, however, strange and unpleasant events began to take place in the lives of those involved in the expedition. Some believe that there was a foreboding inscription, "Death comes on wings to he who enters the tomb of a pharaoh," on King Tut's tomb that put a curse on anyone who disturbed his final resting place.

Lord Carnarvon's story in particular is the most bizarre. The adventurous Earl came to Cairo and apparently died from pneumonia following complications from a mosquito bite. Allegedly, at the exact moment Carnarvon passed away, all the lights in the city mysteriously went out in Cairo and, back in England, Carnarvon's dog fell over dead. In addition, several other people involved with the expedition died, too, including Carter's assistant, his assistant's father and some of Carter's relatives. Carter, however, seemed to escape the curse himself [source: The Museum of Unnatural Mystery].