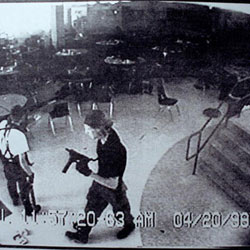 Much was made of Eric Harris (left) and Dylan Klebold's favorite (violent) movies and video games after the shootings.
Jefferson County Sheriff's Department via Getty Images

Starting in the 1990s, a spate of copycat school shootings cropped up across the United States. Most were given widespread media exposure, including a 1996 incident of classroom violence that killed three people. Shooter Barry Loukaitis, 14, burst into a Moses Lake, Wash., classroom wearing a black trench coat and volleyed shots from pistols and a rifle at his classmates. The scene was eerily similar to one in "The Basketball Diaries," a film in which a basketball player (Leonardo DiCaprio) develops a heroin addiction and dreams of shooting classmates in a classroom while wearing a black trench coat.

Another school shooting occurred on the same day, this time in Atlanta, when a 16-year-old student shot and killed a teacher. It was one of at least 50 school shootings that occurred from 1983 to 2008, including the killing spree at Columbine High School in Littleton, Colo. Students Eric Harris and Dylan Klebold shot and killed 13 people and wounded 23 others before killing themselves on their high school campus on April 20, 1999 [source: Allender]. News reporters rushed to the scene and much of the violent incident played out on live TV, leaving some to wonder whether the media attention that the shooting garnered would contribute to school-centered copycat crimes.