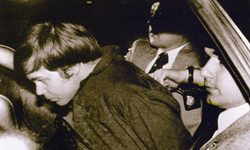 Hinckley in custody after the shootings.
AFP/Getty Images

On March 30, 1981, John Hinckley, Jr. joined members of the press awaiting then-President Ronald Reagan's exit from a Washington, D.C. hotel. As the President left the building and walked toward his car, Hinckley pulled out a revolver and fired six shots. One of the bullets lodged near the President's heart and was removed during surgery. Presidential Press Secretary James Brady was shot in the head and paralyzed, and a police officer and a Secret Service agent were wounded as well.

It was the third presidential assassination attempt in six years, but was the only one credited as a copycat shooting based on a film; Hinckley pointed to a 1976 film, "Taxi Driver," as his inspiration. The movie's plot centers around a Vietnam veteran who seeks to assassinate a presidential candidate, and stars Robert Di Nero and Jodi Foster. During his trial, Hinckley, who had been stalking Foster, said the assassination attempt was a bid for Foster's attention. In 1982, Hinckley's trial ended; he was found not guilty by reason of insanity and sentenced to stay in a mental institution.

Hinckley's crime was a catalyst that led to widespread changes in the way the Secret Service vetted public stops for sitting Presidents. Currently, the public can't be present when the President arrives at or leaves an event. The use of metal detectors was increased markedly, as was the number of Secret Service agents assigned to duty. At the time of President Reagan's assassination attempt by Hinckley, there were about 1,500 Secret Service members; as of 2011, the number had doubled [source: Welch].