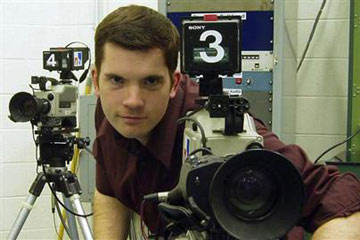 Mark Andrew Twitchell, accused of killing a man after being inspired by the television show "Dexter."
Courtesy Edmonton Police Service

Police believe that Canadian independent filmmaker Mark Andrew Twitchell was on his way to becoming a full-fledged serial killer. Fortunately, he was caught before he was able to commit the requisite three murders. Instead, he was discovered -- and stopped -- after his first killing and, in 2011, sentenced to life in prison.

Twitchell is said to have been inspired by the television show "Dexter," which portrays a forensic scientist who stalks and murders serial murderers. Twitchell created his own plot line, however, which he shot as a short film about a vigilante murder with the same sequence of events that he would follow shortly afterward.

Twitchell is believed to have placed an ad on an online dating service posing as a woman to lure John Brian Altinger to a rented garage under the pretense of meeting a date there. Altinger was never seen again. His disappearance and suspected murder may not have been linked to Twitchell had Altinger not e-mailed his friends directions to the garage before going. Police searched the leasing history of the garage and found that Mark Twitchell had rented it.

Police began to suspect that Twitchell was on the path to serial killer status after another man came forward. This near-victim escaped from the same garage following being beaten by a man in a mask after he'd been lured there by the same online dating ruse. His escape took place a week before Altinger's disappearance [source: Blais].