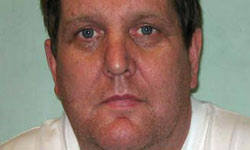 Derek Brown, a 47-year-old-father of seven, followed in the grisly footsteps of Jack the Ripper 120 years after the original, infamous murders occurred. In 2008, Brown was convicted of murdering two women despite neither of the bodies being found.

Brown picked his victims from the Whitechapel area of East London, where Jack the Ripper had carried out his five murders. In August, Brown murdered Xiao Mei Guo, a 29-year-old street vendor, who was videotaped entering a London subway with Brown the day she disappeared. The following month, Brown picked up 26-year-old prostitute Bonnie Barrett and murdered her.

While the bodies were never recovered, police found ample blood evidence from both women in Derek Brown's apartment. Blood evidence was found throughout his home, with the highest concentration of blood stains found in the bathroom. Investigators believe Brown dismembered the women in his bathtub and disposed of their bodies.

He was sentenced to 30 years in prison for the murders. Police believe he was on his way to becoming a serial killer, and after he was caught, they linked him to six unsolved sexual assaults [source: Sky News].