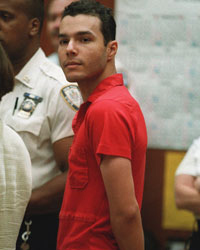 Eddie Seda, the Zodiac copycat killer, is arraigned in Brooklyn in 1996.
Associated Press

During a five-year period in the late 1960s in the San Francisco area, the self-described Zodiac Killer used a knife and a pistol to take the lives of at least seven strangers. He was perhaps the most famous serial killer to employ the media for attention, sending local newspaper offices cryptic and taunting letters aimed toward the police. The Zodiac Killer was never identified.

Twenty years later, a Zodiac copycat began his own attacks in New York City, taking a more literal interpretation of his predecessor by murdering victims based on their Zodiac sign. This copycat killer, however, was eventually named.

Heriberto "Eddie" Seda began his copycat spree in November 1989 by sending cryptic letters to the police and the media. In the months following the missives, he began stalking his victims, shooting each with a homemade gun. At the scene of each crime, Seda left similar notes.

Over the course of the next three years, Seda murdered three New Yorkers and attempted to kill five more. Seda was discovered through witnesses and because he left fingerprints on his notes. After he engaged police in an unrelated shootout in 1996, Seda was arrested and convicted of the Zodiac copycat crimes. He was sentenced to 238 years in prison [source: Haynes].